Kathy here. The Chicks are thrilled to welcome bestselling, prolific (seriously!), and all-around-amazing author Vicki Delany, who’s turning a classic writing axiom on its ear. Take it away, Vicki!

Write What You Want to Know

There is an old adage: Write what you know.

I’ve never agreed with that. Frankly, what most of us know (and thus what we do in our lives) isn’t very interesting. I know all about designing computer systems for the banking industry, growing (and eating) tomatoes, driving long distances, and reading crime novels.

All of which hardly makes for fascinating fiction.

So let’s change the adage to: Write what you want to know.

When my agent, the wonderful Kim Lionetti from Bookends, asked me if I’d be interesting in writing a cozy mystery series set in the Outer Banks, I didn’t say, “But I’ve never been to the Outer Banks. I don’t know anything about it”, I said, “Sure!”

I set about learning. I packed up my car and headed south.

The Lighthouse Library series is set in a real place, the Bodie Island Lighthouse on the Cape Hatteras National Seashore, south of Nags Head, North Carolina. The lighthouse is real, but it is not a library (nor big enough to house one of the size in my books) but we thought it would be fun to pretend it is a library.

Because the lighthouse and the area around it are real places, it was important to me to get it as right as possible. (Except for the actual library in the lighthouse bit!)

I set off on a trip of discovery the first week of October, 2013.  Does that date ring any bells?

With great expectation I drove up to the lighthouse grounds the morning after my arrival. The lighthouse itself is set very far back from the road, and a long winding driveway leads up to the parking lot for not only the lighthouse but trails into the marshes as well.

I was greeted by a man in a brown uniform lowering a barrier. I had heard something about a shut down of the US government, but surely it’s not going to affect me! I’m a Canadian tourist!

I said to the nice man in the brown uniform, “I have literally driven all the way from Canada to see this lighthouse.”

And so I drove sadly away. The lighthouse is set so far back that all you can see from the road is the top. The beaches of the National Seashore were also closed, so I didn’t even get to see them.

But it was by no means a wasted trip. I visited the sites that were open, such as the Elizabethan Gardens, walked the beaches in Nags Head, drove up and down the main streets and side roads to check out the town. I took pictures of houses and shops, ate local foods (my dedication to research is impressive, isn’t it?).

I went to a couple of branches of the library and to several bookstores to introduce myself and my series, and got names to use as contacts for any information I needed to know.

There I discovered a beautiful saying written on the wall. I used it in By Book or By Crook.

“At the Currituck Light they have a saying on the wall I always remember, ‘to Illuminate the dark space.’ That doesn’t seem so important in today’s world, where there are so few truly dark spaces. Particularly along most of the coast of North America. Lights on the eastern seaboard are so bright some cities scarcely have night any more.  But in the old days, the days before electricity? Imagine being out to sea, in a warship powered only by wind or a small fishing boat on a cloudy night, no radio, no satellite guidance, a storm raging all around. And then, in the distance, that flash of light. And you would know you were not alone.”

By Book or by Crook by Eva Gates

I learned what I wanted to write about.

There are now six books in the Lighthouse Library series, with READ AND BURIED released on October 15. In that book I delve a bit into the history of the Outer Banks with sub plots concerning the progress of the civil war in that area and the Freedman’s Colony on Roanoke Island. I hope to always be able to keep learning what I want to know.

Do you agree that an author needs to go beyond what they know? What have you done to learn what you want to know? 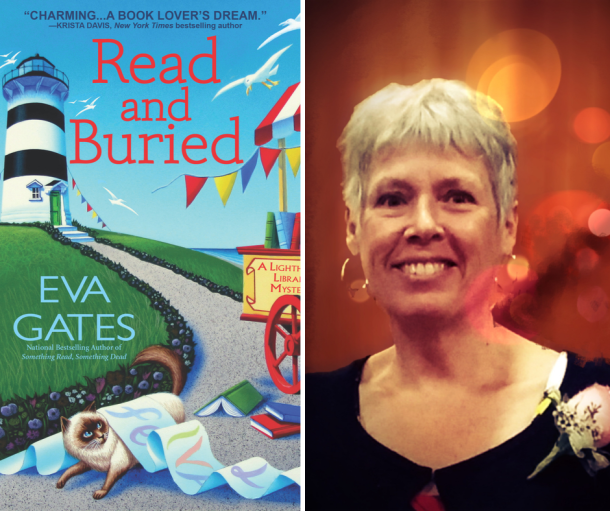 BIO:
Vicki Delany is one of Canada’s most prolific and varied crime writers and a national bestseller in the U.S. She has written more than thirty-five books:  clever cozies to Gothic thrillers to gritty police procedurals, to historical fiction and novellas for adult literacy. She is currently writing four cozy mystery series: the Tea By The Sea mysteries for Kensington, the Year Round Christmas mysteries for Penguin Random House, the Sherlock Holmes Bookshop series and, as Eva Gates, the Lighthouse Library books for Crooked Lane.

Vicki is a past president of the Crime Writers of Canada and co-founder and organizer of the Women Killing It crime writing festival. She is the 2019 recipient of the Derrick Murdoch award for contributions to Canadian crime writing. Vicki lives in Prince Edward County, Ontario.