The mystery-writing bug bit Becky late in life. Growing up in Colorado all she wanted to do was read, roller skate, and gut fish, but never at the same time because that’s dangerous. She remains a cautious person. So cautious, in fact, that when she got her degree in Criminal Justice, she sabotaged her chance at a job where she knew she’d have to carry a gun. But soon enough, all that pragmatism and foresight was tossed carelessly away when she got married and decided to have three kids. Luckily they were all excellent cohorts and she never once felt like she needed a gun.

When those kids were young, Becky stayed home with them and when she felt her brain beginning to turn to mush, she would announce “Naptime!” then hide in her office, clattering on the keyboard of her Mac Classic while they did who-knows-what. The rule was they could only knock on her door if something was “bleeding, burning, or barfing.” Under this system she produced many personal essays á la Erma Bombeck. When an editor bought the first one she sent out for submission, she was hooked. That $50 remains the most exciting money she’s ever earned. She is, however, willing to bump it to second place if someone starts peeling off some tall dough.

The sudden awareness that people enjoyed (and paid for!) her words shot her on the writer’s path. The trajectory, however, was similar to a pinball machine — much exhilarating noise, ricochets into other genres, shiny new projects. It took many years before she landed in the world of mysteries.

She’s comfortable there and plans to stay as long as she’s welcome. She promises not to gut any more fish. Or even talk about it. Unless you want to and then she can wax poetic for hours.

Becky lives in Colorado with her husband and the adorable Nala. One of them can never get enough cookies, loves to be outdoors, and needs constant grooming. The other is a dog.

Visit her website to see which words she hates. While you’re there, subscribe to her So Seldom It’s Shameful News where you’ll get in on cool giveaways, meet some awesome mystery authors, and see adorable pictures of Nala, among other things. Follow Becky on BookBub, on Amazon, on Facebook, and on Goodreads.

If you enjoy her books, she’d swoon if you left a review. Yes, swoon.

Fiction Can Be Murder (Book 1) 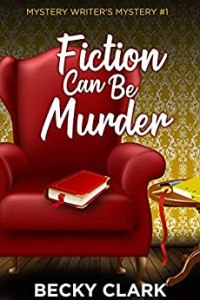 Mystery author Charlemagne “Charlee” Russo thinks the twisty plots and peculiar murders in her books are only the product of her imagination―until her agent is found dead exactly as described in Charlee’s new, unpublished manuscript. Suspicion now swirls around her and her critique group, making her confidence drop as severely and unexpectedly as her royalty payments.

The police care more about Charlee’s feeble alibi and financial problems than they do her panicky claims of innocence. To clear her name and revive her career, she must figure out which of her friends is a murderer. Easier said than done, even for an author who’s skilled at creating tidy endings for her mysteries. And as her sleuthing grows dangerous, Charlee’s imagination starts working overtime. Is she being targeted, too?

“The charming heroine and the supporting cast shine in Clark’s fun and funny solo mystery debut…which doesn’t take anyone too seriously in the best way possible.” – Kirkus Reviews

Mystery author Charlee Russo agrees to speak at a Portland writers’ conference organized by her friend Viv Lundquist. When Viv picks her up at the airport, she frantically explains that her daughter Hanna has been kidnapped. Unfortunately, Viv has a history of embellishing the truth and Hanna has a history of disappearing.

Charlee takes over the conference preparation so Viv can search for her daughter, but the situation gets tense when the hotel double-books the event with a dog show. Despite it all, Charlee is compelled to investigate after she learns shocking secrets about both Hanna and Viv. Can she find Hanna in time, or will a plot twist lead her to a ruff ending?

“So good I wanted to read it twice! It has everything I love in a funny mystery: characters I care about, a plot that grabs me from page one, voice, and laughs galore. Clear your day, because this laugh-out-loud comic caper mystery is a one-sitting read!” – Jess Lourey, Anthony, Agatha, and Lefty-nominated author of the Mira James Mysteries 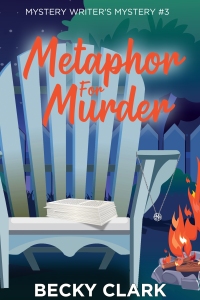 An author’s mysterious disappearance. A pugnacious hired gun holding a pug for ransom. Charlee must find them both before the deadline expires.

Charlee Russo’s career and bank account will be DOA unless her literary event with bestselling author Rodolfo Lapaglia succeeds. It’s her very last chance to revise her life. But when she goes to fetch him from the train station, he has disappeared, much like Charlee’s royalty statements.

An angry mob wants their refund from the cancelled event, but Lapaglia kept the money and stuck Charlee with the bills. As she searches for him and his checkbook, her neighbor’s pug, Peter O’Drool, is dognapped with an ominous demand that Charlee deliver Lapaglia if she ever wants to see the beloved pooch again. Can Charlee solve the mystery of Lapaglia’s disappearance and close the book on this fiasco before Peter O’Drool runs out of time?

1 DOWN: DEATH BY HOMICIDE

Quinn Carr wishes her life could be more like a crossword puzzle: neat, orderly, and perfectly arranged. At least her passion for puzzles, flair for words—and mild case of OCD—have landed her a gig creating crosswords for the local paper. But if she ever hopes to move out of her parents’ house, she can’t give up her day job as a waitress. She needs the tips. But when a customer ends up dead at her table—face down in bisquits and gravy—Quinn needs to get a clue to find whodunit . . .

It turns out that solving a murder is a lot harder than a creating a crossword. Quinn has plenty of suspects—up, down, and across.  One of them is her boss, the owner of the diner who shares a culinary past with the victim. Two of them are ex-wives, her boss’s and the victim’s. A third complication is the Chief of Police who refuses to allow much investigation, preferring the pretense their town has no crime. To solve this mystery, Quinn has to think outside the boxes—before the killer gets the last word . . .

“FRESH, FAST, AND FURIOUSLY FUN . . . Becky Clark writes with wry wit, a keen eye, and no shortage of authority.”
—Brad Parks , Shamus Award-winning author (on Fiction Can Be Murder)