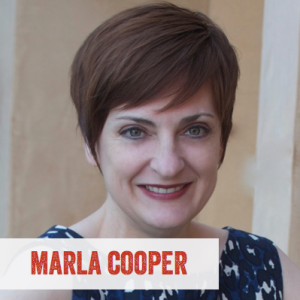 Marla Cooper was astonished when, at the age of 18, she realized people could actually get paid to write things. So she switched her major from business to advertising—much to the relief of her accounting professor—and began her career as an advertising copywriter.

After moving to San Francisco, she became a freelancer so she could take advantage of perks like working in her pajamas, and now she writes a little bit of everything, including travel writing, web copy, and even the occasional haiku. While ghostwriting a book on destination weddings, she found inspiration for her first novel, Terror in Taffeta—the first in a series about a destination wedding planner.

Kelsey McKenna has planned out every last detail of her client’s destination wedding in San Miguel de Allende. But what she didn’t plan on was one of the bridesmaids dropping dead in the middle of the ceremony.

When the bride’s sister is arrested for murder, the mother of the bride demands that Kelsey fix the matter at once. Although Kelsey is pretty sure investigating a murder isn’t in her contract, crossing the well-connected Mrs. Abernathy could be a career-killer.

Before she can leave Mexico and get back to planning weddings, Kelsey will have to deal with stubborn detectives, another dead body, late-night death threats—and guests who didn’t even RSVP.

“Marla Cooper is one funny lady. Her debut mystery, Terror in Taffeta, crackles with sharp writing and clever plot twists. I definitely say “I do” to this rollicking romp through a wedding from hell.” – Laura Levine, bestselling author of the Jaine Austen Mystery series

When wedding planner Kelsey McKenna goes to the Wine Country Wedding Faire, the last thing she expects to do is take on new clients. After all, she’s just there to help out her friend Brody and maybe score some free cupcakes. But when a young couple in a pinch asks for her help, she just can’t say no.

There’s only one problem: they’d been working with Babs Norton, the self-proclaimed Queen of Wine Country Weddings—and things did not end well. Kelsey wants to make sure there are no hard feelings, but unfortunately she never gets the chance. When she goes to Babs’ office, she finds the wedding planner dead on the floor.

Babs’ high-strung assistant Stefan knows exactly who killed Babs: Kelsey. At least, that’s what he very publicly accuses her of at Babs’ funeral. When Kelsey decides to do a little sleuthing to clear her name, she uncovers a myriad of secrets and lies. And when a second wedding planner is attacked, Kelsey begins to wonder if she might be next.

“Feisty and Funny, Marla Cooper’s debut novel shines as she encapsulates the best the genre has to offer: a quick-witted heroine, a puzzling page turner of a plot, and a cast of quirky characters like no other. I highly recommend this terrific first in a series!” – Jenn McKinlay, bestselling author of the Library Lover’s Mysteries, Cupcake Mysteries, and London Hat Shop Mysteries