Anyhoo, this year I had the great good fortune of having my debut mystery, Plantation Shudders, nominated for a Daphne Award in the category of Best Mainstream Mystery. The Daphne’s are sponsored by Kiss of Death, a sub-group of the RWA, and given out at their Death By Chocolate party at the RWA’s  annual convention. Since I live in Los Angeles and the convention was taking place in San Diego , I decide to attend the party. (Spoiler alert: I didn’t win.)

I arrived in town midday. The conference was taking place at the Marriott, which was sold out, so I lodged at the Grand Hyatt next door. Smart move on my part. Here’s the view from my 16th floor room: 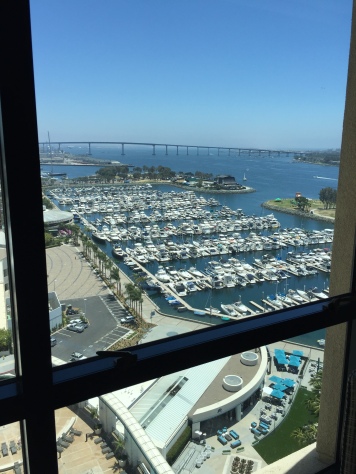 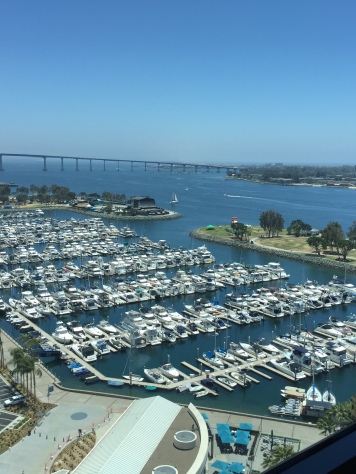 Although I wasn’t officially attending the conference, I was dying to check out the romance writers’ swag room (called the goody room at RWA). I pinned my Daphne nominee ribbon to my shirt in the hope that it would make me look at least a little official, and headed over to the Marriott. On my way to the swag room, I noticed the sign below, and was quite impressed with the RWA’s forward thinking. 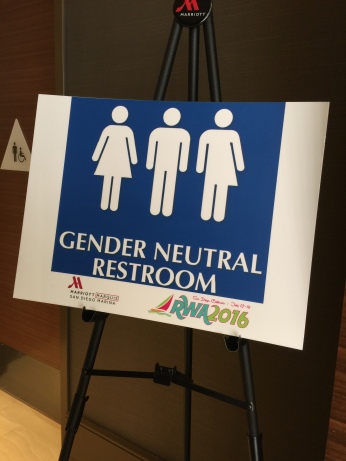 After a few false starts, I found the room. It was a sea of giveaways featuring steamy book covers with titles like Tempted By Love and Searching for Love. Muscled men winked at me from bookmarks as gorgeous women swooned in their arms.  If I still had a sex drive, I would have been very turned on.

Props for the best tagline go to the Camp Firefly Falls series: “Pitching Tents Since 2016.”

I noticed that the attendees at the conference were mostly women, which wasn’t much of a surprise. As far as comparative mystery conventions go, I’d say it was like Malice Domestic but with dirty bits.

Despite my Daphne Award loss, I enjoyed my brief visit to the RWA Convention, the super-hot souvenirs I collected, and the Kiss of Death’s Death by Chocolate  party. The fact I even landed a nomination from this group is quite ironic, considering that I’m like a Victorian spinster when it comes to writing “sex.” (See? I even had to put the word “sex” in quotes for absolutely no reason.) Months ago I bought a book, The Joy of Writing Sex, that I hoped would inspire me. I have yet to actually read it, and instead somehow managed to create a scenario where my protagonist and her boyfriend consummate their relationship between books three and four of my series so I don’t have to write the scene.

But the enthusiastic romance writers have inspired me to up the sexy ante in my Cajun Country Mysteries. Tomorrow I may actually start reading The Joy of Writing Sex.

Just curious… am I the only one squeamish about reading or writing romantic moments? And if you’re not, any tips? (No pun intended!!)

12 thoughts on “Ellen Does RWA”