When I was ten, we moved from Queens, NY, to Scarsdale, NY, as those of you who read my post, My Parents Almost Bought the Gatsby House, may remember.

Our street in Queens was familial. Everyone knew each other. Parent socialized, kids played on the street, and ran in and out of each other’s houses. Scarsdale was the polar opposite. The streets were quiet and devoid of life. Large homes sat beyond expansive front lawns that were empty of swing sets and the games of Red Rover we all played on the top of my old street’s hill.

We’d moved during Christmas break, so I didn’t know a soul in our new community. Too impatient to wait for the winter school session to begin, I took the matter of making friends into my own hands. I’d marched up to the rare kid I saw on the street and introduce myself, much to their surprise. A couple politely welcomed me to the neighborhood, then quickly escaped. But I did make one good friend: Kate Simon. Which is a pseudonym.

Kate lived in a beautiful old Tudor house, much like the one below, a few streets away from us.

Kate was unlike any of the kids back in my old Queens neighborhood. Even as a child, she had a preternatural sophistication. I was impressed by both her and her elegant home. One day during a playdate at her house, Kate’s father came home from work and dropped in to say hi to us.  In my mind’s eye, he was friendly and handsome in a Don Draper kind of way.

But what I really remember is what I saw under his suit jacket – a holster with a gun in it.

This fascinated me. Why would a man who dressed like my dad, an advertising executive, have a gun under his jacket? It’s not a question a ten-year-old asks. But it’s sure an image that sticks with a kid.

Shortly after that, Kate and her family moved to Dallas. Since we’d only known each other a short while, we instantly lost touch. But I couldn’t shake the image of that holster and gun because I was left with an unsolved mystery. What the heck did her dad do for a living? Was he in law enforcement? Considering the family’s  mansion of a home, I doubt it. But if he was in the private sector, what kind of job would require carrying a piece?

I’m not kidding when I say this has haunted me for years. Well, I recently reconnected with an elementary school friend who I’ll call Sarah. After a few months of chit chat, it occurred to me that Sarah lived in Scarsdale much longer than I did. I asked her if she remembered Kate. Not only did Sarah remember Kate, they were  Facebook friends.

Sarah encouraged me to send Kate a Facebook friend request, which I did, never thinking she’d remember me. But lo and behold, Kate accepted my request. I was beside myself. I might actually solve the great mystery of my childhood.  I didn’t want to hit her with a “Hey, why did your dad carry a gun?” on our first day, so I waited a while. Then I finally sent her this message: Dear ‘Kate,’ I have to ask…” 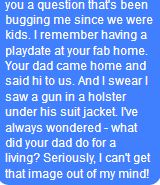 And… I’m still waiting for an answer. I don’t take it personally. Kate seems to be someone who doesn’t pay much attention to her Facebook page. People post to it, but she doesn’t respond.

So I turn to you, readers. What do you think Kate’s dad for a living? To recap: 1)Good-looking man in his mid to late thirties. 2) Well-educated and well-dressed. 3) Imposing home in a famous, wealthy New York suburb. 4) Moves with family to Dallas. 5) Wore a gun in a holster under his suit jacket.