My new series – written under the name Maria DiRico, my Nonna’s maiden name – officially launches tomorrow and I am beyond thrilled. It was inspired by my real life. Cousins by marriage ran two catering halls in Queens, the Astoria Manor and the Grand Bay Marina. (Which ended up as headline news story in New York when it abruptly closed, leaving hysterical brides stranded. But we won’t focus on that right now.)

My mother was born in a little Italian village called Orsogna. (No, I haven’t been there. #BucketList!)

It took over thirty years, but eventually her entire extended family immigrated to America, winding up in a section of Queens called Astoria. I don’t have to tell you how much Italians love their celebrations, so my youth was spent at a variety of engagement parties, weddings, communions, anniversaries, birthdays, and yes, even funeral luncheons. Jer and I married in California, but we had a second reception in, you guessed it, Astoria. At the Grand Bay Marina, where Cousin Pauly did well by us. The Grand Bay was situated in Flushing Marina, with a lovely view of the water – and the planes taking off and landing at LaGuardia Airport.

All of this went into my series. It is literally set where we celebrated our nuptials a second time. You can see the marina in these doctored photos I used in my Shameless Shilling Campaign. 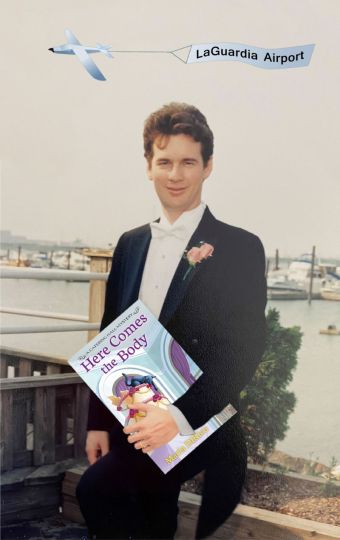 I’m having a blast reliving many memories as I write this series. Although it’s pretty much purely fiction, my protagonist Mia walks the streets I walked to visit family. She lives upstairs from her Nonna in the two-family house where my actual Nonna lived downstairs from my Zio Henry and Zia Rose and their four kids. And everyone eats pastries from our real family bakery, La Guli Pastry Shop.

I hope you have as much fun reading the series as I had writing. Grazie and salute a tutti!

Readers, did your family celebrate events in a big way? Any particular memories?

About Here Comes the Body: Mia Carina has moved back home to Queens, where her father Ravello, a capo with the Boldoni crime family, has been tasked with running a rundown banquet hall that was surrendered to him by a broke gambler. Mia’s always wanted her father to go straight and she’s determined to help him run the place, with its view of Flushing Bay and the LaGuardia Airport runway, as a legitimate business. Then a body pops up – or technically, doesn’t pop up from a jump-out cake at a bachelor party. Who knew working for a catering hall could be as dangerous as working for the Mob?