When I was a kid, poppies were the evil flowers that threatened the lives of Dorothy and her friends in the Wizard of Oz movie. And these days the word “poppy” often brings to mind the killer seeds of the opium crisis. But the starkly bright poppy blossom, often blood red, represents something much, much more: a remembrance of lives lost in battle against foes both seen and unseen.

Today is the last Monday in May, so it is officially Memorial Day. We all know that this year, the celebrations will be different. No inspiring parades with floats, marching bands, and flag-waving children, no noisy hot dogs-and-beer backyard BBQs (well, in my neck of the woods in the Northeast, anyway), no fireworks, no long-awaited kickoff to a gloriously fabulous summer. On the Boston Common, the Military Heroes Flag Garden, with more than 37,000 flags planted each year by 500-plus volunteers, will not remind us of the ultimate sacrifice paid by those who kept us free.

This year, the remembrance efforts are up to us, as individuals as well as communities. People are being encouraged to fly their own flags, or leave their porch lights on. Maybe a “celebration” simply means setting aside a bit of time to remember the heroes we’ve lost, both loved ones and strangers.

Many think that Memorial Day is a special day to honor all of our veterans, but purely technically it’s not (that’s Veteran’s Day, which has seemingly become an awesome day for some to score awesome deals on clothes, appliances, cars, and mattresses). Memorial Day is a time of remembrance for those who died, either in battle or on the homefront, to protect their own and future generations. Today the celebration of  lives lost includes honoring our brave first responders and medical personnel who sacrificed themselves for others, battling on the front lines of disasters such as 9-11, the Spanish Flu of 1918, and now the COVID-19 epidemic.

The poppy became a symbol of remembrance for soldiers in the time of World War I (or “The Great War,” because no one thought there’d ever be another so terrible). The bright flowers bloomed from the battlefields of the Western Front, a frequent sight—and later a distinctive memory—for soldiers enduring the horrors of war. At the time the poppies also inspired the poem  “In Flanders Fields” by Lt.Col. John McCrae of the Canadian Expeditionary Force. Today there is a USAA Poppy Wall of Honor at the National Mall in Washington with more than 645,000 flowers, each honoring a fallen servicemember since Word War I.  Here is a cool link to celebrate virtually

I never knew, until I was much older, why my Navy-vet dad (born 1918) kept a bright red, paper poppy wired to the visor of his car. He never mentioned it, but quietly added a new one every year. Well into his nineties, he continued to buy them while chatting with fellow veterans from the American Legion seated at folding tables outside the Publix grocery store. When he passed away, I found loads of paper poppies in his desk, which now belongs to me. But every year I buy still more, and in each of our families’ vehicles, there is always a bright red poppy representing.

About a week ago, when the long winter appeared to have passed here in NH, I brought fresh flags to the cemetery to plant for both my dad and my mom, a Navy WAVE. To my surprise and delight, someone had already replaced them, and the new flags were waving wildly. 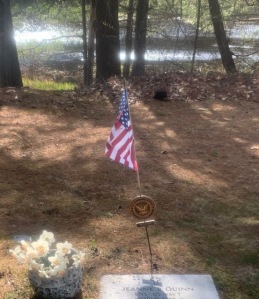 Thank you for remembering, kind stranger. And from the wilds of the Live Free or Die state, may I add: Please feel free to wear a mask this Memorial Day.

Readers, are your plans for Memorial Day different this year? Please share in the comments, we’d love to celebrate with you!