We’re all mature adults (ahem!), but meeting certain authors makes us as shrieky—or stunned—as a teen in the presence of Taylor Swift. Here are our tales of encounters with mystery legends. We’d love to hear yours!

Hell hath no fury like a 10-year-old fangirl scorned—but the object of my adoration at the time was not an author. She was a famous figure skating champion who Shall Not be Named. One warm summer evening after an ice show my parents drove me an hour to see, I waited forever in a long line with everyone else to meet America’s Sweetheart. When she finally showed up, and it was my turn, her agent grabbed my program and dumped it in front of her in

the little booth to sign. He had to, because she wasn’t even looking. With an annoyed, bored expression, she stared over my shoulder and robotically signed an indecipherable swoop—upside down.  I never forgot that crushing experience, so I’m no longer much of a fangirl in that shiny, bright-eyed sense. But last year at New England Crime Bake, I met the keynote speaker—Craig Johnson of Longmire fame—and he couldn’t have been more charming and obliging when I asked if he’d sign my book and pose for a pic with me. Now he has a devoted new fan. That’s the way it’s done, folks. My first book comes out soon, and if I’m ever, ever lucky enough to have someone ask for my John Hancock, digital or otherwise, you can bet I’ll be thrilled to say yes. Long live Longmire!

I don’t have a story about meeting my favorite mystery author. Why? Because I was too scared to go and talk to her!!!!! Ten years ago, I was in my last year of grad school at USC’s School of Cinematic Arts when I heard that Sue Grafton was coming to speak at some luncheon at campus. Even though I was dead broke (Readers: You broke? Shocker!) and nothing scares me more than having to sit at a table for an extended time with complete strangers, I went. I don’t remember much about the luncheon. It was all a blur. I’m sure when she looked out in the audience she saw a hundred smiling faces and me…staring at her like I should’ve been outside in the bushes like a crazed stalker. I remember that she was personable and funny. And I remember that her hair was short. Apparently, I’d thought she’d look just like the author photo from the bookflap of my beloved copy of B is for Burglar. Considering that book came out in 1985, I’m so glad I was wrong. No one should still look like any picture they took in the 80s. No. One.

Between my jobs as a TV writer and entertainment journalist, I’ve met a lot of famous people. I say this not to brag, it’s just been a great way to earn a living. Shirley MacLaine gave me brandy when I admitted to her in the middle of an interview that I had bad cramps. (She swore it would help, and it did.) In the mid-1980s, I was the first journalist to interview Ivana Trump after her initial bout with plastic surgery. (Her publicist insisted that she’d just “rested” for a 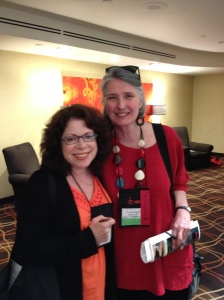 month. Yeah, right. She “rested” in a plastic surgeon’s office. Oh, and she actually did refer to her then-husband as The Donald.) But the only time I ever acted like a besotted fangirl was when I came face-to-face with mystery author Louise Penny at the 2013 Malice Domestic Conference. I gushed, I kvelled, I blathered. I even forced the lovely woman to take a photo with me. Don’t ask me how, but I got her email address and corresponded with her for a while after the conference until she came to her senses, as did I, and we politely ended the thread. We reconnected at the 2014 Left Coast Conference, had a lovely chat, and I can proudly say that Louise Penny recognizes me! Even if she may not remember my name.

I have to admit, I was a little giddy when Cleo Coyle dropped by our blog last week to comment on Lisa’s Nancy Drew post. The Coffeehouse Mystery series is one of my favorites: one year for Christmas my husband got me the complete set of every book in the series up to that point (including some that I already owned). So I got a little frisson of excitement thinking that while Cleo was reading Lisa’s post, my picture was staring out at her from the right sidebar—which is almost like meeting her and telling her how much I love her books, right?

My other fangirl moment came while my editor was collecting blurbs for Terror in Taffeta. She asked if there was anyone I wanted her to approach, and I threw out Jerrilyn Farmer, because as I mentioned a few weeks ago, she’s the one who inspired me to write my series. So when my editor wrote back a few weeks later and said, “I’m so thrilled to be writing with our first blurb, from Jerrilyn Farmer,” I had rapid heart palpitations followed by a general feeling of tingliness. She’d read my book! She knew I existed! Luckily, since it was all handled over email, I didn’t blurt out anything embarrassing, but who knows? Maybe I’ll get my chance to blurt out something embarrassing to both of them one day.