It’s been hard to watch the news lately, so when I was thinking about what I wanted to write about this week, I decided I wanted to tell a story with a happy ending.

Last year, my dad passed away. (Don’t worry, despite the way it starts, this is a happy story!) He was 89 years old, and he lived on a ranch in Oklahoma. Part of his daily routine entailed taking care of a whole slew of dogs and cats, as well as eight horses.

It wasn’t as simple as just giving them food and water each day. He had a complicated routine that involved an hour in the morning, an hour in the evening, and enough steps that it practically required its own instruction manual—which is why he was loathe to let anyone help. I often wanted to help him by streamlining the routine, but then I’d realize that that was what kept him active. And besides, I’m pretty sure he loved those horses as much as he loved us girls.

So, when he passed away, one of the most important tasks we had was finding homes for all the animals. There was Betsy, a beautiful gray mare who was his favorite. (He once compared me favorably to her in temperament, which was about as effusive as his praise ever got.) There was Katy Garza, a gentle soul who was named after a character in a Larry McMurtry novel. There were the four untamed horses that he kept in the back pasture that I called The Wild Bunch. And there was Cinco and Red Wing, the senior members of the pack.

It was easy to find homes for Betsy and Katy. And our neighbor even knew a trainer who was willing to take on The Wild Bunch. (Getting them in the trailer was like a scene out of the Old West, and I’m sure the poor guy was wondering if he’d made a huge mistake.) But then, there was Cinco and Red Wing. 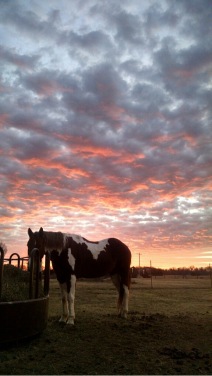 They were both old, beyond the point where anyone would really want them. Add to that the fact that Red Wing had some sort of degenerative bone disease that made him hobble like an old man when he walked. Taking them to auction would probably result in a fate that—well, in the interest of keeping this light, I won’t talk about what happens to old horses sold at auction, but let’s just say it wasn’t an option. And neither my sister or I lived close enough to take care of them so they could just live out their days grazing in their favorite pasture.

We started having difficult conversations about what would be the most humane thing to do for them, and really, there was no solution that seemed like it would work.

At some point, though, my sister said that she’d met someone who was a veterinarian who was going to drop by and look at Red Wing and see if there was something she could do to help him. Not only did she suggest a course of steroids that got him walking better than he had in years, she took a shine to both him and Cinco. She agreed to take them both home with her, which felt like a pretty happy ending right there. They would be well cared for and they’d get to just hang out and graze and enjoy being seniors.

But here’s the really happy ending. Apparently, both of them are doing great under her care—so well, in fact, that the kids are able to ride them.

And rather than write the end of this story, I’m just going to share these two pictures, which explain it better than I ever could.

This is Red Wing just a couple months ago: 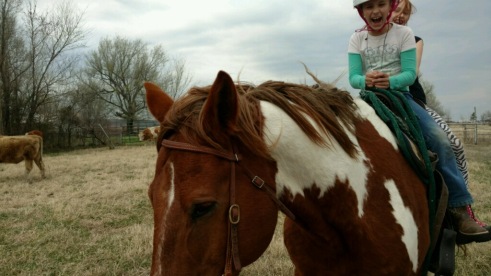 And this is Cinco: 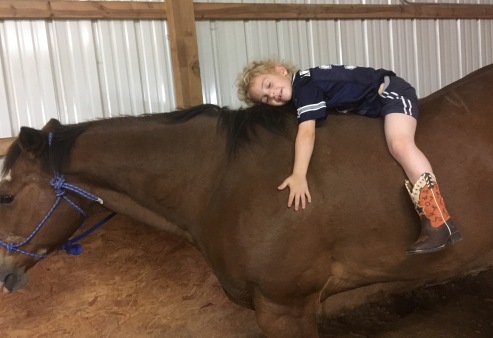 I couldn’t write a happier ending.

9 thoughts on “The Legend of Cinco and Red Wing”