Newsflash! There’s an extra-special bond between writers and their pets. But maybe you knew that already. Just click on practically any author’s Facebook page, and there’s a good-to-excellent chance you’ll see plenty of pics featuring their loyal keyboard companions.

Hemingway had his polydactal cats (you can visit more than 60 of their descendants roaming his Key West home). Emily Brontë tromped the moors with her formidable mastiff, Keeper. Sartre and Twain often wrote with cats in their arms.  And Agatha Christie was a confirmed dog lover.

I love the fantasy of a snoozing pet curled on my lap as I write the Great American Mystery. Maybe with a toasty fire going in the background, and a cup of cocoa—or, in warmer weather, gently whirring ceiling fans overhead and a giant glass of iced tea with lemonade. Even better, what if my pet wasn’t just your run-of-the-mill muse, but actually wrote those gripping tales as I slept?

Sadly, none of those things are ever going to happen. My dog Farley hasn’t shown much interest in penning books—only in eating them. And his co-pet, a devious black cat named Lucy, isn’t much help, either. In fact, the two of them work in tandem to make sure I have zero words on the page by the end of each writing session. They’re a great team. 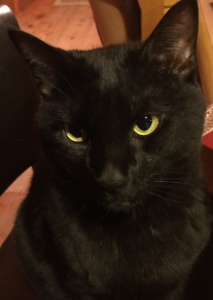 I always get the same question when people meet Farley. Did I name him after the dog in that cute movie with Jennifer Aniston? The naughty dog with the fur and heart of gold? Sorry, no. My dog is Marley with an “F.”  He was actually named after Chris Farley, the late comedian. The two have quite a few similarities, it turns out. They’re both on the larger side, blond, extremely talented, and always in motion.

We chose Farley from a litter of four adorable brothers. He seemed the most enthusiastic on the days  we visited and we had this crazy idea about letting a puppy choose us.

We ignored that he was also the one circling the perimeter, over and over—kind of like me in the writing process. And he always had something in his mouth. That was cute when it was a mini Lamp Chop toy. Now it’s shoes and toilet paper off the roll or my feet when I’m trying to talk on the phone. And once it was an entire folder of handwritten notes for my manuscript in progress.

He’s been to nonstop obedience classes—I have the bank statement to prove it. In puppy class he literally chomped on his fancy completion ribbon as they took the group picture. In the more advanced classes he was a champ in the ring—and a crazy hellion the minute we got home. We tried agility for a while, until I won five months in PT. When I have a serious deadline, I’ll admit that I dump him off at doggy day care, and pay extra for the dogbone-shaped pool.

Am I a terrible dog mom? I hope not. I know my fiendish Farley loves me—and I love him back, crazy as he may be. Maybe we’re both crazy. But sometimes I need a time out from furry muses. Anyone up for a pet play date? The kind where the mommies drink wine, except maybe we could get some actual writing done?

Readers, do you have a helpful muse, of the pet (or any other) variety? Let us know in the comments!

12 thoughts on “Farley and Me: A Writer and her Anti-Muse”