We all have our go-to stories we like to trot out occasionally to impress people. Having spent my career in the entertainment industry, I’ve got my fair share. But here’s my real party piece. If you have this edition of Entertaining, which I came upon at a recent Friends of the Library sale… 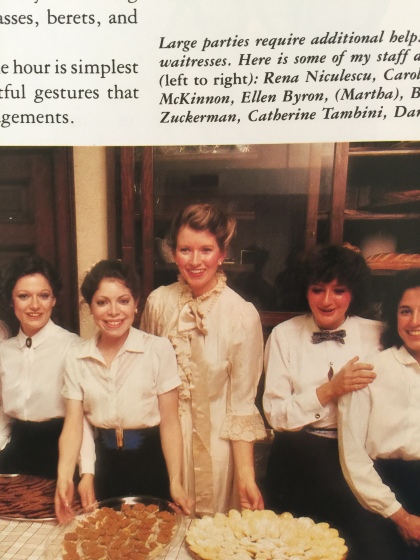 Who’s that Downstairs-lookin’ gal? Why, me!

There you’ll find a familiar face standing next to Martha Stewart. That’s right, I worked for Martha. Like, side by side, cutting up crudité. I’m not kidding when I say this is the most interesting thing about me. There are a lot of playwrights and authors and even television writers out there. But how many people can say they stuffed snow peas and worked an omelette station next to the legendary lifestyle and entertaining queen?

I’ll never forget the first time I met her. I took the train from Manhattan up to Westport, Connecticut to do party prep for an event she was catering. A cab took me to Martha’s now-famous home on Turkey Hill Road. I stepped inside, looked into a gorgeous, antique-filled living room, and saw a woman using a crème brulee torch to assemble a gingerbread townhouse.

This is the gingerbread house Martha was making when we first met. No joke. For real.

So what’s Martha Stewart really like, you ask? I can only speak to my personal experience with her, and I have to say… I loved her. Those pictures of the lush vegetable garden and spectacular kitchen? That was her house. Her life. Martha was authentic.

Part of Martha’s backyard. That’s right, part of it. It was HUGE.

Yes, she could be demanding but she had an extremely demanding job, and worked harder than any of us. She had a sense of humor that would come out when the pressure was off, and a great laugh. Martha was also intensely loyal to her family, many of whom worked for her. I got to know several of her siblings, Laura and George in particular. I actually worked George’s wedding. (Sadly, both of them passed away far too early, Laura in 2014, George just this past March.)

I wish I could remember what appetizer I was making here. I’m pretty sure it was for George’s wedding.

Gradually, my cater-waiter days waned. The social x-rays of the Upper East Side decided they only wanted men serving their hoity-toity guests, so us gals were relegated to the kitchen. I eventually took a full-time job at The Dramatists Guild, and my playwriting career began to heat up, which left little time for side gigs. And once Entertaining became a publishing juggernaut, Martha did less and less catering until she stopped entirely.

The last time I talked to Martha was in the Nineties when I was writing the My First Job column for Glamour magazine. (Sidebar: Martha’s first job was as a stockbroker, although she modeled while in college.) Martha and I chatted for a long time, and she gave me updates on many of the people we worked with back in those early catering days.

I think of Martha whenever I’m creating a recipe for my Cajun Country Mystery series. I’d love to see her again sometime. If I did, I can predict what would happen. There’d be a moment of placing me because I don’t look like I did in that Entertaining photo. Then a screech of recognition, a big hug, and a lot of catching up.

In my experience, that’s what Martha Stewart’s really like.

Yup, even us cater-waiters got a shout-out in the Acknowledgments.

Readers, did Martha  ever make an impression on you?