I bonded with Christine Gentes of the awesome mystery blog, mapyourmystery.com, over our mutual love of New Orleans. She’s also a Mardi Gras veteran. I’ve shared a bit about my own wonderful Mardi Gras experiences, but they pale in comparison to Christine’s. (Although my college bestie was queen of Proteus and a maid in the court of Rex so I got to go some MG balls, which was way cool.)

Since Mardi Gras is tomorrow – laissez les bons temps rouler! – I thought I’d let Christine share some stories and tips from her visits… AND some great photos from this year’s celebration, where the Gentes family got to “krewe” at the Morpheus parade.

The Gentes family does Morpheus

What inspired your passion for Mardi Gras, and how many times have you gone?We have been New Orleans fans for years especially after having been there several times in the last seven years. We talked about Mardi Gras, but I am not a big crowd person so I was always worried. Finally a friend from Nola talked us into it and we had a great time. This will be the second Mardi Gras for us, first time on a float.

Tell me about a typical Mardi Gras day for you. We usually try to go to New Orleans on the last week of parades, so we will be in town on Wednesday, February 7 until Fat Tuesday, February 13, and that’s when the best parades begin. There’s at least one parade every day during that week. We eat breakfast and lunch and wander through Jackson Square because week day parades don’t begin until 5:30 or 6:00 pm. Then we head to St. Charles St. to find a good spot on the neutral side (fewer people, less competition for throws). We also try to find a spot near a restaurant for accessibility to restrooms.

Photos of the Morpheus float, home to the Gentes during the Krewe’s parade

What are a couple of your favorite experiences and/or memories from your Mardi Gras visits? Oh, the entire time is such a blast. We desperately wanted to catch a decorated shoe from Muses, but there was so much competition for it. My daughter is great about catching throws. We’ve had lighted beads, some of the large beads, krewe throws and all sorts of stuff. After the first two days down there, we sent back 40 lbs of beads, throws, plastic cups and all kinds of other stuff. It’s crazy and there are so many beads, enough for everyone to have a neckaches from wearing them!

What are some of the best throws you ever caught? The best throw (so far) was the small decorated coconut from Krewe of Zulu on Fat Tuesday. Denise and I both caught one, so we have two. Yay

Is there anything Mardi Gras-related you haven’t done yet that you’d like to experience? Riding a float, but this year we are doing that. We also plan to attend the Krewe of Mopheus (our Krewe) before and after parade party as well Endymion’s bash inside the Superdome on Saturday evening. 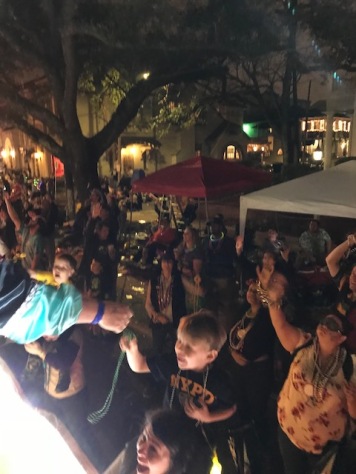 Beads lined up for the throws to eager parade-goers

Where do you stay and what are some of your favorite restaurants? The first time we stayed in the Marigny, just off the French Quarter but it was too far from the action and difficult to get back to after the parade. This year we are staying in the Warehouse District about five blocks from the parade route, walking distance which is great. Traffic is crazy after the parade and the entire parade route is blocked off except to walk.

Restaurants: Mr. B’s on Royal St., Antoine’s on St. Louis near Royal (must tour the Rex Room), Jax Brewery on Decatur (especially if you can eat outside overlooking the river), the Gumbo Shop on St. Peter near Jackson Square, St. James Cheese Company on Tchoupitoulas (great for lunch), Cafe du Monde (of course), Royal House on Royal St., and Muriel’s on Jackson Square. You cannot go wrong with any restaurant in New Orleans. So many place, so little time.

What advice would you give anyone who wants to do Mardi Gras in NOLA? Go, go, go. Disregard the stupid stuff people who have never been there say about Mardi Gras. It is a very family-oriented event. I know that’s hard to believe, but the parades don’t go through the French Quarter any more, they go through the neighborhoods. Lots of kids and families. No flashing of boobs (except on Bourbon St. and that happens any day of the week anyway). The parades are unbelievable. The floats are spectacular and everyone is so friendly. Make sure you have something warm to wear at night. Even though you are in the south, New Orleans is damp, cold city at night. I did not heed that advice the first Mardi Gras we attended and froze in the evenings. 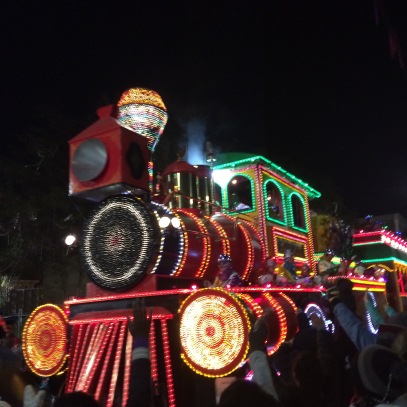 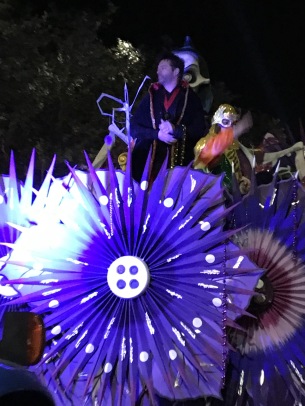 Photos of floats from Christine’s past Mardi Gras visits

Thanks, Christine! Readers, have you ever had a Mardi Gras experience, in NOLA or anywhere else? Any questions for me or Christine about the holiday?

17 thoughts on “An Insider’s View of Mardi Gras”