There seems to be cosmic power in the number three.

And let’s not forget the three pigs, the Three Musketeers (the men AND the candy,) and those bastions of slapstick, the Three Stooges.

However, the triple-powered axiom that’s been on my mind the most is “third time’s the charm.”

Why? My third book came out this month. 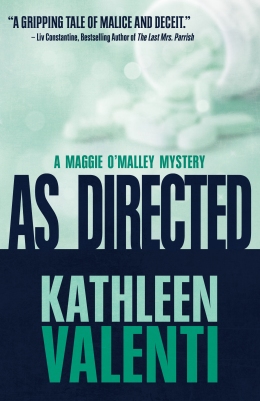 As Directed, a.k.a. book three in the Maggie O’Malley mystery series, was my problem child with a host of gestational challenges and a difficult birth. Maybe that’s why I love it so very much and hope against hope that it will lead a charmed life.

As Directed follows Maggie in the aftermath of the events in the series’ first two books. She’s recovering from a head injury. Cracks have formed around the edges of her personal life. And although just in her mid-twenties, Maggie’s starting over, rebuilding her world and her career as she embarks on a new job at Petrosian’s Pillbox, the town pharmacy.

The job at Petrosian’s presents a host of new beginnings, both literal and figurative, and things seem to be going her way. At first. She emerges from the shadow of the past. Her confidence blooms. New possibilities with Constantine develop. Yet as she spreads her wings, things begin to go terribly wrong. A customer falls ill in the store, followed by another, and then more.

All under her watch as a pharmacy tech.

On its face, As Directed, is a classic tale of poisoning. But beneath the tinctures of toxins lie a tale of poisonous relationships: old grudges, past sins, and buried secrets unearthed by circumstance and chemistry. It’s also a story of vulnerability, resiliency and, despite what life dishes out, discovering our inner baddie.

As Directed is a different book for me. Although it possesses the series’ signature humor and suspense, it’s deeper, maybe a little darker, and a good bit more emotional. Maybe that’s why it was so hard to write. Maybe that’s why I love it so much.

So three cheers for working through the hard stuff to get to (what’s hopefully) the good stuff. Now I’m off to my three-martini lunch. Or, for me, my three cups-of-coffee break.

What you difficulties have you worked through, professionally or personally? Please share!