The Chicks are delighted to welcome Margaret Dumas, author of the Movie Palace Mysteries. The first in the series, Murder at the Palace, is available now!

The first book in my new Movie Palace Mysteries series—Murder at the Palace—came out a few weeks ago, and while that’s fabulous and amazing, it’s also nerve-wracking and stressful, because it means that now it’s time to try to promote it. For an introvert like me, the talking-about-my-book part can be harder than the writing-my-book part. But this time things are different. 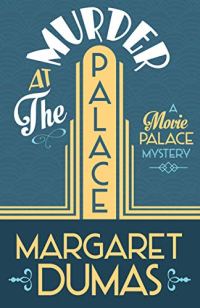 Murder at the Palace is set at the fictional Palace movie theater in San Francisco. The historic theater is a glorious throwback to the early days of Hollywood, showing only the classic films that are loved by the people who work there, including the new manager, Nora Paige.

Nora’s movie-star husband has just left her, so she’s fled Hollywood’s gossip mill to take refuge at the Palace. She should feel safe there, among people who love old movies as much as she does.  Granted, she would probably feel safer if she hadn’t found a murdered man on her first day on the job. And she would probably feel saner if she hadn’t made friends with the bubbly ghost of an usherette named Trixie who died at the Palace in 1937.

I’m having such a good time with this series because I, like Nora, love classic movies. I’m the kind of person who doesn’t consider the question “What’s your favorite movie?” to be answerable in less than a weekend. I mean, how could it be? What kind of movies are you talking about? Can you compare a musical with a drama? Can you pit Bette Davis against Katharine Hepburn and hope to have anything other than a lengthy, delicious argument? You cannot!

That’s been the best thing about working on this series. In the past, when I’ve promoted my books, I’ve mainly talked about…my books. But with this series, my readers seem to want to talk about movies. Which is so much easier!

I’ve now started having signings, and going to conferences, and for the first time in my career this introverted writer is looking forward to talking to people. Because I know we’ll be talking about movies as well as books. And—I think you’ve probably picked up on this by now—I love talking about movies.

I also have some pretty strong opinions about them, which can have its pitfalls. For example, I met a guy on a dating site (because I’m single and I think that means I’m legally required to be on a dating site) and he ghosted me after I told him my favorite John Wayne movie was The Quiet Man. I have to admit I kind of admired him for sticking to his principles. He was all about the Westerns. It never would have worked out.

For years my friends have told me I should blog about classic movies, just to give them an idea of where to begin. And probably to stop me from staring at them in blank incomprehension when they told me they had never seen My Fair Lady. I mean, how can a person walk around in the world without having seen My Fair Lady? But I digress.

I never did start blogging, but now I can have Nora do it. You can find her blog posts in Murder at the Palace, and also online at MoviesMyFriendsShouldWatch.com.  (Please bear in mind, the opinions expressed are Nora’s, but I mostly agree with them.)

Okay, so what are our takeaways from all of this? One: Watch more classic movies. Really, you won’t regret it. Two: If you’re going to be at Left Coast Crime or Malice Domestic, find me and let me know what some of your favorite movies are. (Note: I didn’t say ‘your favorite movie’ because we just won’t have the time for that.) Or drop me a line at my website. Three: Seriously, watch more classic movies!

Margaret Dumas writes books about smart, funny women who are searching for adventure, love, and the occasional murderer in the San Francisco Bay area.

Margaret’s first mystery series featured Jack and Charlie Fairfax as a crime-solving couple in the tradition of Nick and Nora Charles. Her new series, the Movie Palace Mysteries, is set in the world of classic Hollywood movies and the people who love them—including the ghost of an usherette who died in 1937.

When not writing, Margaret spends most of her time reading mysteries and watching classic movies. See what she’s up to at www.margaretdumas.com.