Today we are thrilled to host acclaimed author, Peggy Townsend, who pens the Aloa Snow Mysteries, the newest of which, The Thin Edge, was released just last week. Take it away, Peggy!

My own character, reporter Aloa Snow, is molded in the same vein. She’s tough, intelligent and a bit of a control freak: gutsy enough, for example, to tell a dangerous goon that the only thing she was afraid of was “dying from your bad breath,” but also vulnerable enough admit her recovery from an eating disorder isn’t always smooth or simple. If you asked me, I would tell you Aloa was easy to write, not because I’m particularly tough myself, but because, when I started out as a journalist, I had my very own kick-ass woman to lead the way.

Marj von B worked for a rival newspaper and was in her early 50s when I met her. She was stick-thin with a helmet of grey hair and a penchant for jeans and button-down shirts. She drank two martinis every night, cursed like a stevedore, and decades of smoking left her with a sandpaper laugh and, eventually, the lung cancer that would kill her.

She’d written about the arrests and trials of two notorious killers, Herbert Mullins and John Linley Frazier, and spent five hours alone in a holding cell interviewing the six-foot-seven serial killer Edmund Kemper. When he began taunting her by wondering why she didn’t ask him graphic questions about the gruesome ways he’d killed some of his victims, Marj said, “Oh, for god’s sake, Ed.”

She was tough with people who lied to her and was generous with the newbie, me. She let me trail her as we made the daily rounds of the police and sheriff’s departments and to the courts where we combed through file drawers of lawsuits. I listened as she talked our way into crime scenes and once curled up with her in the back of a tiny sports car as we snuck our way into a closed area to cover the hunt for a lion that had escaped from a private zoo. At the scene of a bank robbery, FBI agents refused to come out and give us a statement so Marj grabbed a piece of paper. “We’re on a deadline!” she wrote. Except Marj had inserted an expletive between the words “on” and “deadline.” We pressed the note against the glass door and banged on it until one of the investigators came out. “What the hell?” he said but then he laughed and gave us a statement.

We were two women in a world populated mostly by men, and we showed up at murder trials, fires, crime scenes, and drug busts. It wasn’t long before they started calling us “The Snoop Sisters.”

When I saw my first dead body, Marj told me to never look at something unless I absolutely had to. When we discovered a crooked judge, she gave me a lesson in hunting down the truth even if it was hard to find. She also taught me that humility and humanity had their place in journalism.

But most importantly, Marj taught me how to stand up for myself.

At the time, I was young and blond and the target of some pretty sexist comments by some—not all—of the cops. They asked what I did to get my stories and openly discussed my body parts. The worst of it was at a regular briefing for detectives, and the first few times it happened, I left the room shaking. One day, I decided to summon my inner Marj von B.

The next time a detective made a remark about my breast size, I gave him a hard stare. “Screw you,” I said, although I used a saltier, more Marj-Von-B version of the word.

The rest of the guys in the room laughed so hard, the sound echoed out into the hallways. From that day on, not a single man said another sexist word to me, and I learned a lesson I still use today.

Kick-ass women are hard to knock down.

Readers: Have you ever had a mentor who showed you the ropes or taught you how to stand up for yourself?

About The Thin Edge: 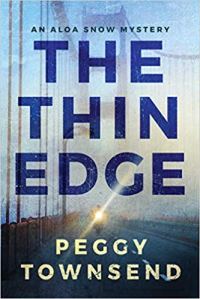 Disgraced investigative reporter Aloa Snow is scrambling to get her life back on track when a friend’s son is accused of the high-profile murder of an ex-prosecutor. Despite her misgivings, Aloa steps in to help and discovers there were plenty of people who wanted the former assistant DA dead. As she digs deeper, her investigation plunges her into a world of vigilante justice and a horrific, decades-old crime. She soon finds herself on the wrong side of a killer, pushed to the thin edge between life and death.

Peggy Townsend is an award-winning newspaper journalist who has covered stories that ranged from the capture of a serial killer to health care inequalities and a Holocaust survivor’s quest for justice. Her debut mystery novel, See Her Run, was released last year by Thomas & Mercer and was named one of the “13 Thrillers to Keep You Up At Night” by Kirkus Reviews. Her second novel, The Thin Edge, was released May 14 of this year. She is a runner, a downhill skier, and has twice lived in her van for seven weeks while traveling across the country and to Alaska.