Today, we welcome the five finalists for this year’s Lefty Award for Best Humorous Mystery (three of whom just happen to be Chicks on the Case). Congrats to all! 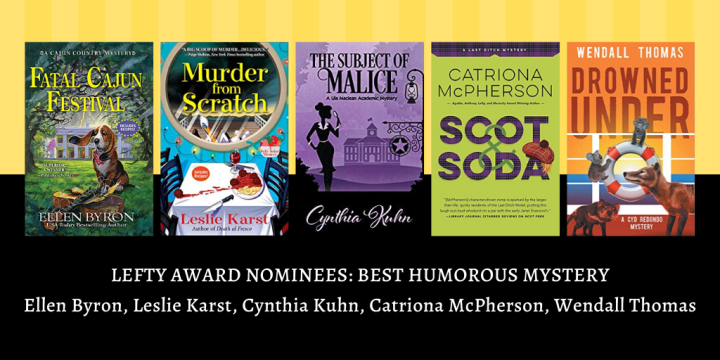 The winner won’t be announced until the Left Coast Crime banquet on March 14th, but in the meantime we thought it would be “humorous” to find out from the nominees which of their characters from their nominated books they think would be the most fun to hang out with at a party. 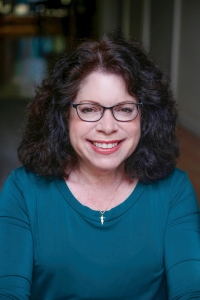 Who of my FATAL CAJUN FESTIVAL characters would be the most fun to hang out with? I’d have to put my money on Grand-mere. For all her Maggie-Smith-in-Downton-Abbeyish qualities, Gran is very self-aware and remarkably progressive for an 83-year-old. She’s really been meta since before meta was even a thing. It would be great fun to gossip with Gran at a party because she would be shockingly blunt but couched with the veneer of a Southern grand dame. She’s also deliciously mischievous and subversive, and likes to push the envelope to see how much she can get away with. There are two other reasons why Gran would be fun to hang with. 1) She loves to knock back Sazeracs and party, albeit discreetly. And 2) she was partly inspired by my own mother, whom I adore and is the most fun person to hang out with ever. She’s also laugh-out-loud, “Oh no she didn’t!” honest in the same way Gran might be. Case in point, this was Mom’s reaction when she saw my Agatha trophy: “That’s a strange-looking teapot. Can you drink out of that thing or do you just show it off?”

Sally’s Italian grandmother, Nonna, comes to mind first, as the 87-year-old Giovanna’s acerbic wit and fondness for recounting naughty tales of her parishioners’ indiscretions would be sure to amuse most any room. Plus, if the gathering were a pot-luck, she’d be sure to bring along a mouth-watering bracciole or a plate of her tender, buttery mezzaluna cookies.

But Nonna would likely be shocked (or at least would feign shock) at the goings-on of any truly good party, so I’m going to go with Sally’s law-school pal, Nichole. Nichole’s an immigration attorney up in San Francisco, but when not arguing cases in federal court, you’ll most likely find her holding a court of her own, regaling folks with colorful stories told in her native tongue of snarky skate punk. Oh, and Nichole shakes up a mean Gimlet, as well—always a plus at any party.

Cynthia Kuhn: Nominated for The Subject of Malice

A thorough review of the evidence suggests that the Most Fun to Hang Out With At A Party title would have to go to Nate Clayton, one of Lila’s best friends who makes her laugh at every turn. For example, he tries to convince her to go to one affair she doesn’t want to attend by promising that they “will amuse ourselves with running commentary about other people’s costume choices.” And by “people,” he means the faculty members currently trying to ruin their lives. At another party, he brings Shakespeare into the mix by proclaiming, a la Richard III, “My kingdom for a beer!” Unexpected literary allusions always earn bonus points in Stonedale. Also, he’s the first one to dive into activities like dancing or apple-bobbing, and his enthusiasm is contagious. So Nate’s the clear choice for festivities wingman, and sometimes his observations may even carry a hint of wisdom, like when he asks a colleague to pass the cheese tray since “cheese holds the answers to many of life’s obstacles.” So there’s that.

Who, from the Last Ditch Motel, would I take to a party if my ticket allowed plus (strictly) one? Hmmmmm. Well, it wouldn’t be Lexy, the protagonist; I hang out in her head all the time when I’m writing her stories in first person. And it wouldn’t be Todd, her side-kick, because he’s usually there too and he doesn’t recognise the category “boundary”, so I feel as if I know him pretty well. Todd’s husband, Roger, is a bit more of a closed book, but he’s a paediatric surgeon (i.e. completely knackered). He’d be poor value after eight o’clock. (Yes they’re doctors and yes they live in a motel (see book 1.)) The motel owners, Kathi and Noleen, are a good bet. But how to pick? Well, Kathi is a severe germaphobe; she’d hate a party. Out of kindness, I’m going to let her stay at home in her aggressively clean comfort zone and take Noleen. Potty-mouthed, acerbic, no-nonsense Noleen. She’s the living embodiment of the saying “You ain’t got nothing good to say ’bout no one? Come sit by me.” 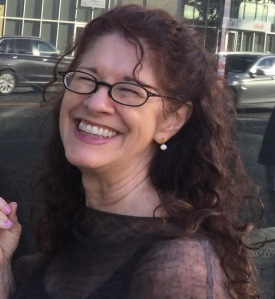 Wendall Thomas: Nominated for Drowned Under

Barry the chameleon from Lost Luggage is my favorite, but at a party, he’d have a tendency just to blend in. So, if I had to choose one character from Drowned Under to have as my wingperson, it would be Cyd Redondo’s fourth grade teacher, lapsed nun, and disco queen, Sister Ellery Magdalen Malcomb.

At 60, Sister Ellery met a widower at a Catholic raffle, chose romance over rosaries, and never looked back. At 81, she lives on a cruise ship, is still nimble on platform shoes and first dates, and can almost keep her fluorescent orange halter top anchored during “Stayin’ Alive” Dance Finals. As she once told Cyd, “You don’t know what Hell is until you’ve taught a class of seventh graders. According to the Archdiocese, I’m headed back there when I die. Until then, I’m going to have fun!”

Readers: Who would be your character of choice from a mystery novel to hang out with at a party?

47 thoughts on “Who Are the Lefty Award Nominees’ Most Humorous Characters?”