Kathleen here. I’m so thrilled to welcome Liz Milliron, author of two fabulous series: The Laurel Highlands Mysteries and the new Homefront Mysteries, which just launched yesterday(!!) with The Enemy We Don’t Know. Today she’s here to share with us her research about, well, research. Take it away, Liz! 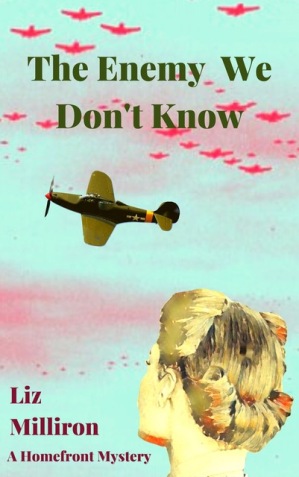 Thanks Kathleen and all the Chicks. It’s great to be back.

As Vickie blogged about last week, readers often want to know about the research that goes into a book. What do I, as an author, do to learn what I need to know to write the story?

There are a variety of answers to this question. Some folks, like Chick Cynthia Kuhn, have experience in their protagonists chosen field. Others, as Vickie wrote, go on “field trips” to interview and observe people. Really lucky ones, like Deborah Crombie, get to go on trips to Europe and walk in the very same locales as their characters.

Research for my Laurel Highlands Mysteries series, a contemporary police-procedural, is rather straightforward. I have police officers and lawyers I email with questions (because I am not a cop or a lawyer, nor do I play one on TV). I take frequent trips to the Laurel Highlands. It’s all good, as they say.

But when I decided to write The Enemy We Don’t Know, set in Buffalo, NY in 1942, I faced a conundrum. I’m from Buffalo, originally, so I knew quite a bit about the city and its history, but I didn’t have a T.A.R.D.I.S.* to zip back in time and observe events as they happened. I didn’t even have a Wayback Machine**. What was I to do?

A few things, as it turns out.

The Web is a magical place. Any writer will tell you it’s a rabbit hole one can easily fall down, but I did my best to stay focused. What did the P-39 look like? Thank you, Google Images. What did the clothing look like? There are so many websites on this it’s crazy. What did a factory worker make per week in 1942? The Bureau of Labor Statistics has tables going back for decades (the answer is about $33 by the way). What was the average cost of a movie ticket? Also lots of tables of data on this one (average price of a movie ticket was twenty-five cents). I found websites that gave the history of various words, including when they came into use, so I could avoid using ones that weren’t in use in time period.  Fortunately, the streets of Buffalo have not changed much, so I spent a lot of time looking at Google Maps, which not only gave me street names, but the borders of neighborhoods such as Kaisertown and the First Ward.

My father is not quite old enough to have known Buffalo in 1942 (he was born in 1947). But he’s a history buff and he did spend his childhood in the area, which was not so different than what I was writing. Dad found me information on bus routes and verified what language would have sounded like. And since Betty is loosely based on his mother, he gave me insights into her personality that allowed me to bring her to life.

This one was SO HARD (just kidding). I read a lot of books set in the time period, such as Renee Patrick’s wonderful Lillian Frost/Edith Head series, and Kathryn Miller Haines’s Rosie Winter books. And I watched many of the same movies Betty would have seen in the theater, although I dialed them up on Amazon or Netflix. Doing so allowed me to get a sense and rhythm of speech to craft realistic dialogue, instead of having my 1942 characters spout anachronistic phrases.

These folks were wonderful. I found their website one date and on the spur of the moment, decided to call them. Their mission is to document Buffalo’s contribution to air and space history, including operations of Bell Aircraft during WWII. They have a recovered P-39 at the museum and part of their grounds are from the original Bell facility. When they found out I was writing a novel that featured their beloved P-39 and Bell history, they were thrilled. I wasn’t able to visit, but I exchanged many phone calls and emails with museum staff to discuss details of the factory and operations, and they recommended several books on how the planes were built. I hope to be part of a live event they are staging in the spring.

Far from being the drudge or chore I feared it would be, the research for this book was fun. I’m looking forward to the next book, and doing it all over again.

* Time And Relative Dimensions In Space

** Anybody remember Mr. Peabody, his Wayback Machine, and his boy, Sherman? 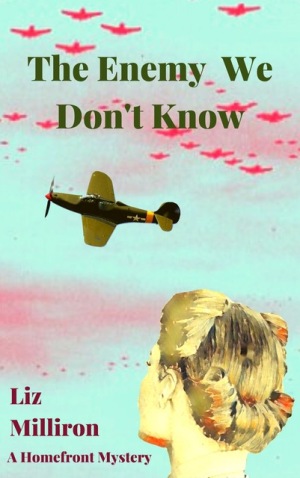 November, 1942. Betty Ahern is doing her part for the war, working at Bell Aircraft while her older brother and fiancée are fighting overseas, but she really wants to be a private detective like her movie idol Sam Spade. When sabotage comes to the plant, and a suspected co-worker hires her to clear her name, Betty sees it as her big chance.

As her questions take her into Buffalo’s German neighborhood, Kaisertown, Betty finds herself digging into a group that is trying to resurrect the German-American Bund, a pro-Nazi organization. Have they elevated their activities past pamphlets and party-crashing?

When the investigation leads Betty and her two friends into a tangle of counterfeiting and murder, as well as the Bund, the trio must crack the case–before one or more of them ends up in the Buffalo River…wearing concrete overshoes.