Like everyone who’d registered for Left Coast Crime this year, I was faced with the decision two weeks ago whether or not to attend, given the health risks posed by the COVID-19 virus. Since I’m in good health with no respiratory or immunity issues, I determined to go. After all, it’s one of the best mystery conventions in the world, and would be my only opportunity this year to see many friends in the mystery community who regularly attend the event. (Not to mention the fact that I was one of the nominees for the Lefty Award for Best Humorous Mystery—along with fellow Chicks, Ellen Byron and Cynthia Kuhn!)

I arrived from Hawai‘i at the convention hotel in San Diego on Wednesday night, just in time for a late drink at the bar with a group of convention attendees—including my roommate, Ellen—and then hit the sack, ready for four days of going to and being on panels, singing at the Author Cabaret, hosting Author-Reader Connections, and general all-around schmoozing.

It all started out well. After checking in at the registration desk Thursday morning, I dropped off a stack of bookmarks at the swag table and then headed off to listen to the terrific panels the LCC committee had organized for that day. Later that afternoon, I was on the “Culinary Cozies: What’s Cookin’?” panel, along with Maya Corrigan and G.P. Gottlieb, and Mark Baker moderating, which was great fun. 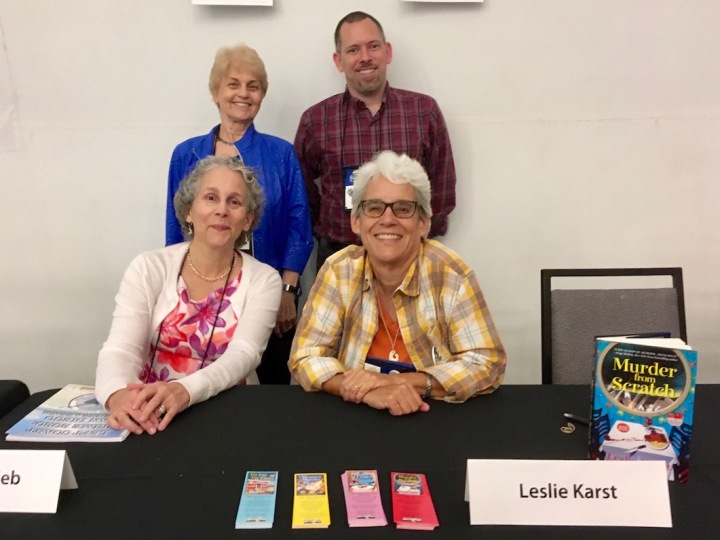 After the book signing that followed the panel (with no books to sign, alas, because the vendor had declined to send anyone to actually sell the books, out of COVID-19 concerns), I headed back to the registration area—only to learn that the convention had been cancelled, effective immediately.

What followed was a bit surreal: attendees wandering about the hotel, their faces reflecting the surprise, confusion, and sadness we all were feeling. But I heard nary a grumble or complaint. (Note: LCC couldn’t cancel the convention until they were forced to do so by the county/state, as this mandate was what triggered the “force majeure” clause in the insurance policy, ensuring LCC would not lose the money invested in the event, which would have bankrupted the organization.)

Many attendees decided to stay on for a day or two, so that we could at least continue to socialize (at a proper distance, mind you)—which of course was one of the primary purposes of attending the convention. Here’s a photo of breakfast the next morning (the lei were provided by Cynthia Kuhn, who had brought them for her author-hosted table at the cancelled banquet).

After breakfast, Ellen, Laurie, her husband John, and I decided to spend the day at Balboa Park, and we had a fab time visiting the Air and Space Museum, the Japanese Gardens, and the Museum of Photography.

This space junkie was thrilled to get to squeeze
into a replica of the Mercury space capsule!

By Saturday, however, the hotel was starting to resemble a ghost town. (The gal at the reception desk told us they were now at 19% capacity, and it was only going to go down from there.) My flight home, however, wasn’t till Monday morning, and I was not looking forward to a lonely two days in the hotel all by myself.

Thank goodness for Sue Ver Voorn, a reader I first met at LCC 2017 in Honolulu! Sue took me under her wing, insisting I come stay with her for my last two nights, and not only provided room and board and drove me to the airport, but also gave me a tour of the beautiful city of San Diego, including the fabulous mid-century breakfast joint, The Waffle Spot. 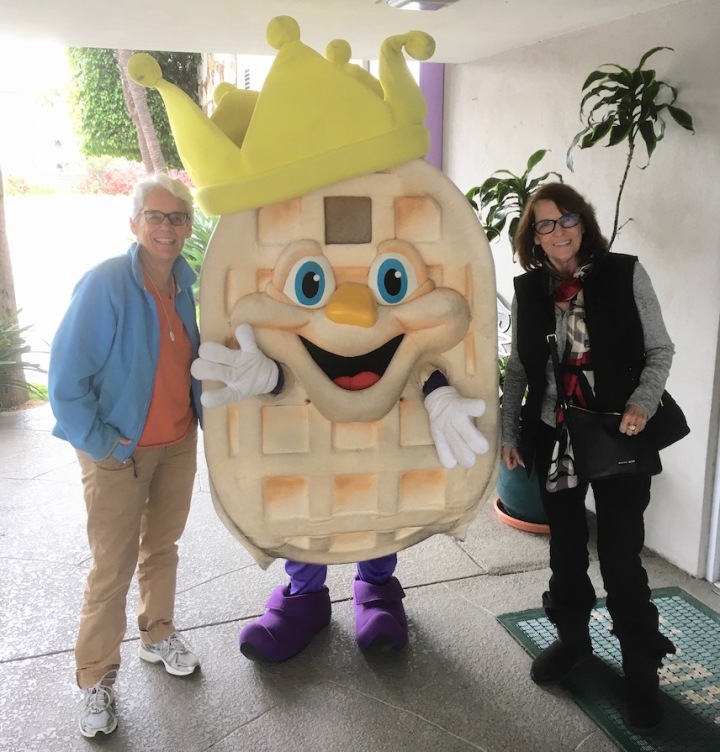 me with the Waffle King and Sue
(the fried chicken and waffles were delicious!)

Sue’s warm and generous welcome was a perfect example of why I so adore our community of mystery writers and readers, and why I so love Left Coast Crime.

AND—look at the wall hanging Sue has!

In retrospect, if I had it to do all over again—even knowing the convention would be cancelled at the end of the first day—I wouldn’t hesitate to do so.

P.S. When I finally made it back to Hawai’i, I put myself in self-quarantine, just to be safe and ensure that any nasty virus I might have picked up in California did not spread to anyone else. Please stay home, everyone! We can get through all this!

Readers: Do any of you have a heart-warming story regarding this year’s LCC (or any other event that’s occurred since this virus has swept across our land)?