The Chicks are so happy to welcome back Annette Dashofy, USA Today bestselling author of the Zoe Chambers mystery series. Today she talks HGTV inspo and her new release, Til Death, the 10th(!) book in this beloved series.

Take it away, Annette!

I had lived my entire life without cable or satellite television until last September when I had a falling out with my internet service. (Not naming names, but the company begins with V and ends with zon.) I discovered a small, local company that provided faster, more reliable internet. It also provided a deal that included cable for dirt cheap. So last autumn, I switched from hiccupping antenna TV to a basic cable package that offered a plethora of channels and shows I’d only heard about before.

Welcome to my obsession with HGTV.

We built our log cabin in 1982. And I do mean we built it. Hubby, family, and friends assembled the logs. My cousin was a carpenter and did the interior walls, doors, and windows, but I was his unskilled labor assistant. Hubby and I were young and didn’t have a lot of money, so our kitchen cabinets and countertops were low-end.

Now, as I watched Chip and Joanna, Ben and Erin, Mina and Karen, and the rest remodel and renovate homes all winter long, my hankering for a remodel of my own grew from wish to lust to laser-focused online searches for light fixtures, sinks, and countertops. I couldn’t wait for March because my current book was due to my publisher in February. I planned to turn it in and start spending long hours browsing the lumberyards and home improvement centers to examine in-person the materials I wanted and to get estimates.

We all know what happened in March. So much for long, leisurely shopping trips. So much for having a little bundle of cash to put into home reno.

My kitchen remodel is on hold. Indefinitely.

However, I like to live vicariously through my characters. A few books ago, Zoe acquired a fixer-upper of a farmhouse—a “gift” from her mother. It had no plumbing, no appliances, no functioning furnace. Can you say, “money pit”?

Throughout the last few books, Zoe and Pete have been gradually making improvements, making the place at least livable. While the house isn’t based on mine, I can picture it in my mind and can sympathize with Zoe’s plight.

She and Pete are finally preparing to move in during the course of Til Death. They’re moving Pete’s furniture and “stuff” with the help of friends and borrowed pickup trucks. It’s how we do things around here.

Granted, I finished the book prior to the pandemic, so I didn’t feel the need to impose my own renovation frustrations on Zoe. She has enough to deal with. But as I’m now working on the next book, my feelings of HGTV envy might start seeping into Zoe’s life. Those kitchen cabinets and ratty countertops have to go.

If I can’t have nice things, at least Zoe should be able to get them!

Readers: Have you ever tackled a fixer-upper project, big or small? How did it turn out? 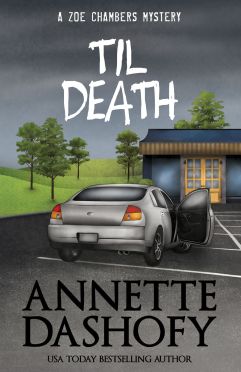 When one of Chief Pete Adams’ first murder convictions is overturned, he and County Detective Wayne Baronick are assigned to reinvestigate the case. As new theories about the murder surface, Pete begins to question not only the original suspect’s guilt, but his own investigative skills from the days when he first took over the Vance Township Police Department.

Did Pete put his personal feelings ahead of his quest for justice and lock up an innocent man? Or is the defendant as devious as Pete first believed?

Meanwhile, Zoe Chambers, Monongahela County’s new chief deputy coroner, struggles with the turmoil of two mysterious deaths—including someone close to her heart—as she tries to master her new job and plan her upcoming wedding.

But her investigation soon links to Pete’s case, making Zoe the target of a killer determined to keep the truth from getting out. Can Zoe see the danger in time, and get to the church for her wedding…alive?

USA Today bestselling author Annette Dashofy has spent her entire life in rural Pennsylvania surrounded by cattle and horses. When she wasn’t roaming the family’s farm or playing in the barn, she could be found reading or writing. After high school, she spent five years as an EMT on the local ambulance service, dealing with everything from drunks passing out on the sidewalk to mangled bodies in car accidents.

These days, she, her husband, and their spoiled cat, Kensi, live on property that was once part of her grandfather’s dairy. Her 5-time Agatha-nominated Zoe Chambers mystery series includes Circle of Influence (also nominated for the David Award for Best Mystery), Lost Legacy, Bridges Burned, With A Vengeance, No Way Home, Uneasy Prey, Cry Wolf, Fair Game, Under the Radar, as well as Til Death.