What happens when three (out of four) Chicks meet up for the first time at one of the biggest traditional mystery conventions in the country? Read on for a recap of this year’s Malice Domestic convention!

One of my favorite things about Malice—and I’m pretty sure I’m not the only one who feels this way—is meeting people I’d only known online. It was like going to summer camp and reuniting with all your old friends… except that you’ve never met before! (And they kill people for fun.) I am basically madly in love with no less than twenty people I was already pretty fond of going into it.

One of the highlights of the conference itself was the New Author Breakfast, where they call all the new authors up one by one to talk about their books. Now, they scheduled the breakfast for 7:00 a.m. the morning after the banquet. Because who doesn’t want to close down the bar and then get up early? Add to that the fact that I live on the West Coast, so it was basically at four in the morning. (If only I woke up looking like Beyonce like Kellye does! I woke up with such a hilarious case of bedhead that I immediately texted it to Ellen and Lisa.)

I barely remember what I said, but it was a great warmup for my panel: “Just Die Laughing: Humor in Mysteries.” The panel was moderated by the awesome Kendel Lynn of Henery Press, and she did such an amazing job she basically she ruined me for all other panels. My favorite feedback was a woman who posted on my Facebook, “We were at a panel next door and we could hear you all laughing!”

All in all, my first Malice was everything I had hoped it would be, and now I’m having to adjust to a life where I can’t just wander downstairs and find my friends in the bar. It’s a hard adjustment, and I’m dealing with it the only way I know how: by signing up for Bouchercon in September! (Who’s in?)

I think I’m still recovering from Malice. Or maybe it was that nine-hour train ride home (during which I was supposed to get sooo much writing done, but slept instead). Anyhoo, I had a fabulous time and the whole conference was a great learning experience for a newbie author. I got to sit at Ellen’s nominee table at the banquet, which was an honor, join fellow Guppies at the Booeymongers lunch (I kept calling it Boogyman’s), attend Marla’s hilarious panel, and hang out with readers and friends I’d been dying to meet in person. (*waves to Vickie Fee*) 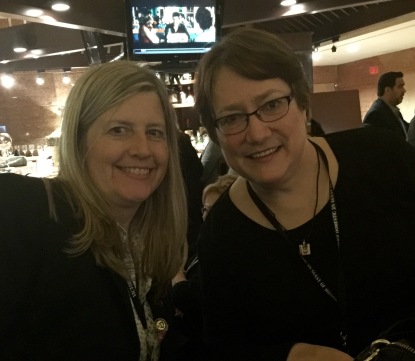 It pretty much goes without saying that one of the highlights of the weekend for me was spending time with two of my fellow Chicks. Missed you, Kellye! (Sniff.)

I was also thrilled to be on a panel (my first ever as an author!) re: sleuth teams moderated by the amazing Dru Ann Love of Dru’s Book Musings. (Note to Hyatt Bethesda: Steps up onto the stage would be a helpful addition.) 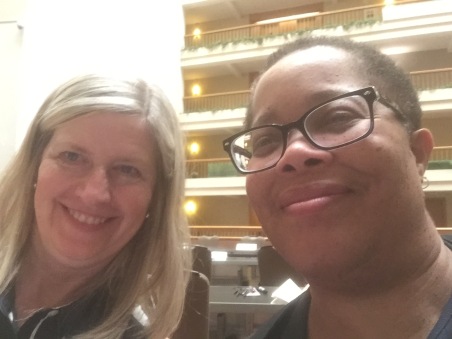 Oh, and I also got to sit next to Nancy Martin of Miss Ruffles fame for my first author signing (well, okay, as an ebook author I signed postcards my publisher made up for me–thanks, Carina/Harlequin!). Here’s a birdseye view of Marla at her signing:

And here’s one Marla took back at me, as I was leaving for Union Station. Until next year, guys. (Yes, Kellye, that means YOU!)

I drank too much wine and put faces to the names of people I’ve e-befriended over the last year. I had lunch with my fellow Best First Novel nominees, lost the award to one of them (who would be a certain Mr. Art Taylor), and didn’t care a bit. I accidentally referred to Rhys Bowen as Reese Witherspoon during the first question Margaret Maron asked me at the Best First Novel Panel, and survived the embarrassment. I hosted a table of fabulous, brave people who dared to don feather masks – including fellow Chick Lisa Q. and my publisher Matt Martz. 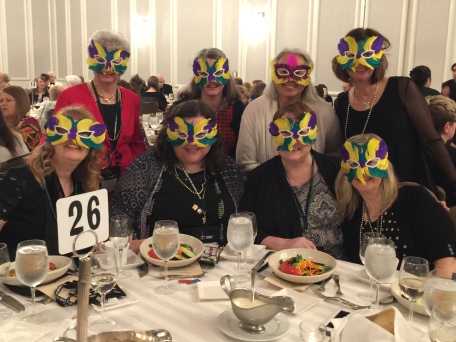 I yakked with old friends and made new ones of awesome authors and wonderful, wonderful readers. I lived the dream of rooming at Malice with Chick Lisa, finally met awesome Chick Marla — and will never forget the picture of her bedhead — and missed the heck out of Chick Kellye. I wore a lot of purple, a little green, and had the time of my life. I can’t wait to go back next year, and Kellye G. sure as heck better be there!

Readers, did you go to Malice Domestic this year? Pretend it’s the Hyatt bar and say hi!

22 thoughts on “What Did Happen At Malice Domestic…”