Of all us Chicks, I seem to be the one who’s always under the wire, holding on for dear life by one claw.  Sure, I do plenty of chirping, but it takes a while sometimes for me to work up to the flying part. And of course that includes the business of writing a manuscript, typing “The End,” and sending it winging its way to one’s publisher.

Throughout the process, there’s always Hope that miracle will happen (and preferably soon). It’s what keeps us writers going. Hope, though, can be annoyingly elusive at times. When I hear the word, I think of Star Wars, in which things do not always work out swimmingly, and Emily Dickinson’s poem “Hope Is The Thing With Feathers.”  That image has always bothered me. I mean, is it better to have feathers or not to have them?

Anyway, I do apologize, dear readers and fellow Chicks, that this post is a teensy bit late today. But the good news is, after a lot of wire-hanging and endless Hope, I finally finished my book this week!!! (And my taxes, yay—about ten minutes ago).

I also just returned from a whirlwind trip to New York City this weekend, where my daughter and I and two of her friends launched the search for The Perfect Dress for her wedding next spring.

After the first appointment, which was a tad overwhelming, we hit the nearest trendy bar for a Prosecco or two. Things didn’t go much better at the next stop, or the next. The consultants seemed either too pushy, or too checked-out. One told my daughter she was “a very unemotional bride” (at which point she burst into tears). The dresses seemed too beaded, too poufy, too risqué, too conservative, too busy, too boring, too expensive, or too princess-y. Time after time, we were surrounded by young women ecstatically saying “yes” to the dress, while we slunk out in defeat and said “yes” to more cocktails.

At our last stop, after my daughter was whisked away to the dressing rooms by a consultant who told us they’d “be back” (i.e. sit down and shut up), her friends and I waited on a velvet couch and watched the other young women take their turns modeling on the multiple pedestals for their entourages. I teared up each time a bride-to-be found the special dress that spoke just to her.  Literally, their faces just glowed. There was the fairy bride, the shy girl covered in head-to-toe satin, the older bride FaceTiming across the country with her maid of honor, the mermaid bride, the preppy bride, and…yes, the bride in hopeful feathers. (I won’t show them here so as not to spoil anyone’s wedding reveal. But here’s a pic of a dog who hangs out at the salon.)

You’re probably thinking this is the part where I dramatically announce that my daughter found The Perfect Dress. Well, that didn’t happen—not yet. Sometimes, you just have to keep the faith and keep plugging. But she has Hope, just as I do for writing that next book. And at the very least, we’ll always have Prosecco. 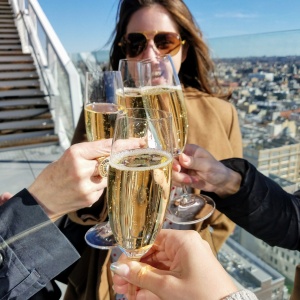 Readers, tell us what you’re hoping for right now in the comments below–and/or how you stand on feathers!

9 thoughts on “Hoping for Feathers”