I’ve always had a thing for old cemeteries. (That doesn’t make me weird does it? No? Okay, good. Whew.) And while I’ve visited a lot of fascinating cemeteries, I now officially have a new favorite, and it’s just a few miles from my house. This is the kind of cemetery they give tours of twice a month — yes, it’s that good — and last weekend I finally was able to go. So with no further ado, I’m excited to introduce you to Oakland’s own Mountain View Cemetery.

It dates back to 1863, and — get this — it was designed by Frederick Law Olmsted. I know, right?! For those of you who don’t follow famous 19th-century landscape architects, Fred was the guy who designed Manhattan’s Central Park. And if that’s not an impressive credential, I don’t know what is. 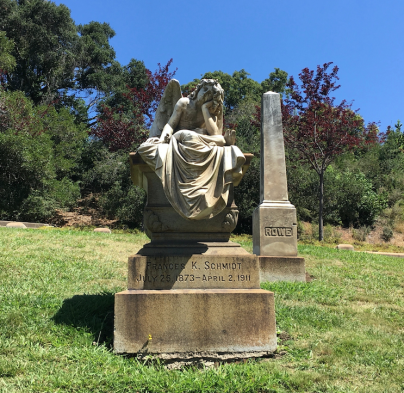 Pensive angel staring out across the hills

Once you learn that fact, the rest makes sense. It is indeed park-like, so much so that couples walk their dogs there and moms jog through the winding roads with their baby strollers. I actually saw someone sun-bathing on the potter’s field, probably lying right on top of an unmarked indigent grave. Not sure I’m totally on board with that particular usage — but come to think of it, I only know it’s a potter’s field because the tour guide told us. The sunbather probably thought it was just an unused hillside meadow. 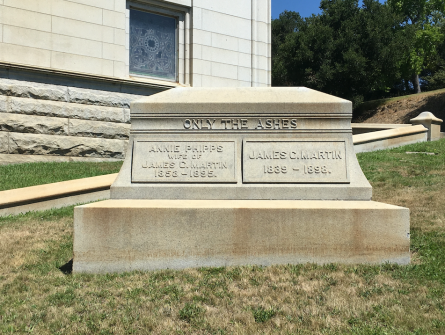 Let’s be clear. It’s only the ashes, people!

There are two more things that make Mountain View particularly spectacular. One is the view. And no! It’s not a view of a mountain, despite what the name would have you believe. Mountain View is on a mountain — okay, well a hill — but the real view is of downtown San Francisco all the way across the bay. 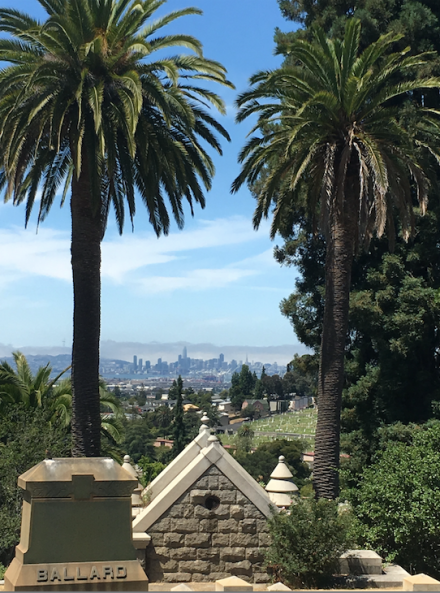 The other is Millionaire’s Row. This is where you’ll find the mausoleums of the rich and famous (for their time): politicians, architects, poets, ship-builders and the like, the people whose names grace parks, lakes, streets, and historical houses all over the Bay Area.  The most instantly recognizable name? Ghirardelli. Inside of his crypt are little squares of tinfoil-wrapped chocolate bearing his name, tossed through the bars in homage. 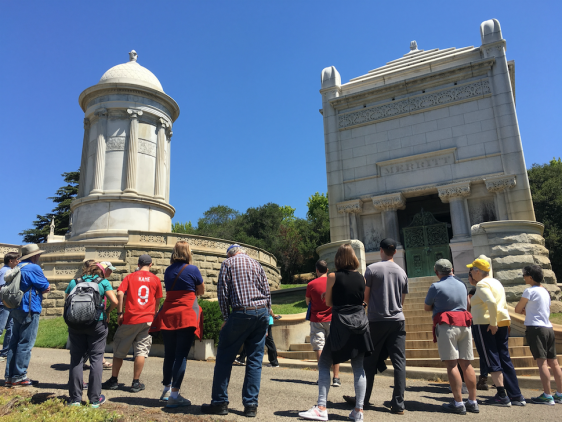 Two of the mausoleums on Millionaire’s Row

Readers, what’s the most interesting cemetery you’ve ever been to?