We’re thrilled to have the delightful and talented Shari Randall visit again today as our Guest Chick! Against the Claw, the follow-up to her stellar debut, Curses, Boiled Again, was just released. Shari will be giving away a copy of the new book to one lucky commenter. Take it away, Shari!

I’ve had one too many fake Facebook friend requests.

They say you always remember your first.

His name was Richard Tony. Sandy hair, easy smile. He’d sent me a Facebook friend request. Yes, the name struck me as somewhat unusual, but I clicked anyway. It was 2014 and I was new to this whole Facebook friending scene. He looked nice and he was a soldier, clean cut, and square jawed. Plus he was friends with many of my friends.

My finger hovered over the Accept button. Was I being un-American, unsure about friending a soldier? But something held me back.

Then I scrolled down, Under “Started New Job” he’d written: West Point – The U.S. Military Academy, New York City. I was pretty sure West Point was not in NYC.

Since then, scammers using two bland names and photos hijacked from other people’s Facebook profiles have been constant visitors in my feed. To cope, I just call them Two-Name Guys and delete their requests. They’re the ants at the Facebook picnic, the poison ivy in the Facebook garden.

As the years have passed, I’ve gotten better at spotting the scammers, mainly because the scammers have such a hard time coming up with believable names. Still, some profiles stand out.

I really missed my chance with Burton Adam. His profile photo showed a silver haired Army General in a dress uniform with a chest full of medals. Not only was he an Army general, he was also a graduate of the Sorbonne and a surgeon with the UN! Plus he somehow had time to work on an oil rig. Much as I appreciated the scammer’s grasp of intriguing occupations, I did notice that the General’s nametag read “Taylor.” Gotta sweat the details Two Name Guys. Delete.

Certain themes repeated themselves. Yes, military guys. But also oil rig workers. It struck me as believable that someone working on an oil rig in the middle of the ocean would be looking for friends but some of these boiler room hackers aren’t well attuned to believable emotional details. I sense that they’re newbies, new to scamming but also, perhaps, just young. They don’t understand women but they think they do. So they use vague photos of bouquets of flowers in colors that don’t exist in nature, or pics of waterfalls and rainbows with sparkling, ungrammatical messages like “You Love” and “Hearts Will Be Much.”

I felt like I’d unlocked a special level of FB when I received a friend request from Bryan Denny. I’d just read an article about him and here he was! Denny is a real guy whose photos and personal details have been used by dozens of criminals to scam lonely women out of thousands of dollars. You can read about him here: https://taskandpurpose.com/military-romance-scams-bryan-denny/

In the last year or two, Two Name Guys have morphed from soldiers into Guys with Dogs, Guys with Sportscars, and Widowers with Adorable Children. Who lists their occupation as widower? Delete.

Just as technology is ever changing, so are these guys. They’re now on Instagram, up to the same old tricks. 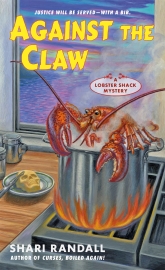 Finger-licking delicious, Shari Randall’s AGAINST THE CLAW is the second in the Lazy Mermaid Lobster Shack series, of which King’s River Life review said,“The action and intrigue build to levels that will have readers more than ready for the next installment in this suspenseful and very entertaining series.”

Welcome back to the seaside village of Mystic Bay, where someone’s been found sleeping with the fishes. . .

Ballerina Allie Larkin is still back home, healing up from a broken ankle and lending a hand at her aunt’s Lazy Mermaid Lobster Shack. But now that the famed restaurant is branching out into the world of catering, Allie’s help is needed more than ever—even on the lobster boat. The last thing she expects to find once she’s out on the bay, however, is the dead body of a beautiful young woman.

When days pass and not even the police can ID the corpse, Allie takes it upon herself to learn the truth about what happened. Her investigation leads her all the way from the local piers to the secluded estates of Mystic Bay’s posh elite. But how can she crack this case when everyone seems dead-set on keeping their secrets beneath the surface?

When she’s not committing murder (on the page, of course), Shari enjoys walking the beach near her house, traveling and eating the local cuisine, reading, and dancing. She’s a librarian, and is the Library Liaison for Sisters in Crime. You can see what’s new with her at https://us.macmillan.com/author/sharirandall and check out her mermaid obsession on Instagram @sharirandallauthor.

Make up a FAKE FACEBOOK FRIEND NAME and post it in the comments. One lucky commenter will win a copy of the second book in the Lobster Shack Mystery series, AGAINST THE CLAW.