The Chicks are excited to welcome back award-winning author Julie Moffett. The eleventh book in her popular Lexi Carmichael Mystery Series, NO STONE UNTURNED, was just released by Carina Press–and you can win an e-copy! (***UPDATE: Giveaway is now closed. Please see comments section for Winner Announcement!*** )

Hi, I’m mystery author Julie Moffett. I write the long-running, geeky mystery series featuring geek girl Lexi Carmichael. A lot of people ask me how I came up with the character of Lexi. It all started because I’m a James Bond geek. As a teen I read all Ian Fleming’s books and then saw the movies. I adored the danger, the thrill of a complicated plot, the international action, and the over-the-top chase scenes. Once in college, I even decided to join the CIA, majoring in Political Science and Russian Language and going all the way through four years of the interview process—including taking a tour of the site, meeting my prospective boss in the psychological profiling unit—and taking a lengthy lie detector test. (By the way, did you know that the CIA cafeteria at Langley has two sides to it: one side for the ordinary agents and one side for the covert agents?) At the last moment, however, I changed my mind, opting instead for a less restrictive career in international journalism. But my love for all things spy and international remained.

So when I began to dream up a new series, I decided to do it by turning the James Bond image on its head. I wanted to create an action/adventure character that would be an antithesis to 007. She would be a loner, lacking in social skills and grace, and anti-fashion. Instead of using her debonair charm and good looks to save the day, she’d use her brain. A super-charged geek brain. To help her out I’d pair her with a set of super genius geek twins to help her through any crisis (think Q2). Her best friend would be more of a Bond girl who could help her navigate the tricky waters of dating, socializing, and finding a decent dress. Throw in a sexy secret agent and a hot Irish lawyer and things really heated up for our geeky heroine. To add more laughs, I gave my character an obsession with all things Bond, which leads to many humorous moments in the books. Voila! Lexi Carmichael was born.

In her latest adventure, NO STONE UNTURNED, Lexi thinks getting engaged means calmer days ahead. But when her fiancé’s past brings up more questions than answers, she’s not going to let anything—or anyone—drive them apart. 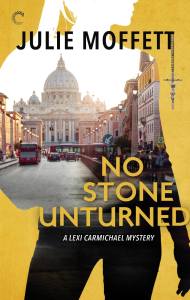 Getting engaged is supposed to be a fun, exciting time in a girl’s life. But things are never that easy for Slash and me. Instead, someone is threatening to expose Slash’s past–a past so secret, even I know very little about it.

Before I can get used the weight of Nonna’s antique ring on my finger, he’s on his way to Rome…and we’re farther apart than we’ve ever been. Still, I have no intention of sitting at home and letting him take on the Vatican by himself.

With a little expert-level hacking, I learn Slash is keeping secrets from me. Big ones. Dangerous ones. In fact, the more I dig into Slash’s past, the more I discover things about him I never knew–things that eventually pit us against each other.

From Rome to the Amalfi coast to the highest levels of the Vatican, we both race to discover the truth. No matter what I find, we’re officially a team now, so I won’t let him face this alone. Even if I don’t know if our relationship can survive it.

**GIVEAWAY!** I’m giving away an e-copy of either the first book in the Lexi Carmichael series, NO ONE LIVES TWICE, or the first book in the young adult mystery spin-off of the series, WHITE KNIGHTS. How to enter? Just let me know in the comments below: Who is your favorite Bond? (***WINNER ANNOUNCEMENT: The randomly-chosen winner of Julie’s giveaway is Mark Baker***!)

31 thoughts on “Moffett. Julie Moffett. And She Has a Giveaway!”