Greetings, Mystery Fans, from aboard the Acela Express! Lisa here, chugging home from the annual Malice Domestic conference in Bethesda, MD. I haven’t even begun to process all the amazing events of the weekend–but here are just a few from my Chicks highlight reel.

I arrived at the hotel a day early, and had the immediate good fortune to run into some author friends in the lobby.  Cheryl Hollon (who was wearing a killer hat, as always) and I enjoyed a Malice-Eve dinner with Terry Shames. I also had a chance to catch up with the lovely Mary Feliz.

On Thursday evening, Becky had a book signing, while I awaited the arrival of our fellow Chicks. Some of them ran into nasty weather (lightning–eek!) along the way.  Leslie took the award for Most Ridiculous Delay: waiting for hours to connect for a 12-minute flight between DC airports. We did manage to squeeze in an informal Poultry Night. Some of the Chicks met with their colleagues from Henery Press (a.k.a. the Hen House), while Ellen and I toasted her safe arrival from LA. 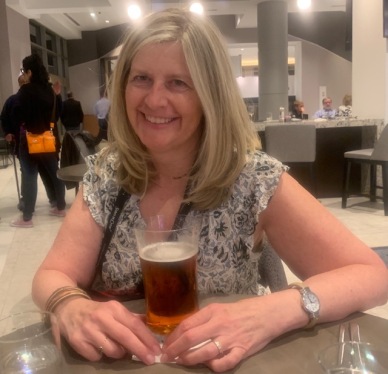 The next morning, three of us Chicks participated in author speed-dating. The official name of this event is Malice-Go-Round, which involves pairs of authors circulating at breakneck speed through 20 tables of readers (phew!).  Becky, Leslie and I had a blast introducing our series to readers. Becky’s partner was the ever-awesome Libby Klein. I teamed up with Leslie (ask her about her Pink Squirrel cocktail recipe). 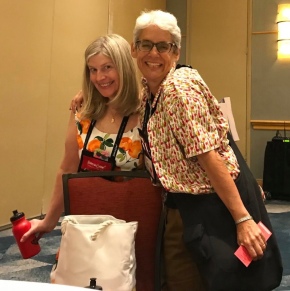 From there we rushed to a Chicks lunch at a cute place in the nearby Pike & Rose district called The Summer House. We were so busy cheeping, we may have driven the poor waiter a little crazy, but he very nicely agreed to take our first group photo of the weekend. Vickie, Marla and Kellye were unable to make it this year, and we really, truly missed them, but here is the Malice Chicks Class of 2019: 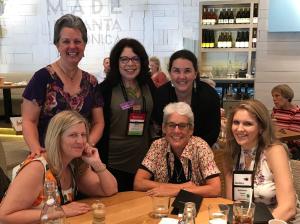 We had to be back at the hotel before 3 pm for the Agatha-nominee panel for Best Contemporary Novel (nominated title: Mardi Gras Murder). In addition to Ellen, the panelists included Bruce Robert Coffin, Annette Dashofy, and Hank Phillippi Ryan. (The remaining nominee, Louise Penny, was unable to make the conference this year.) Here’s Ellen with moderator and blogger-extraordinaire Kristopher Zgorski.

Later that evening, Cynthia had a signing with her fellow authors of this year’s Malice anthology, Mystery Most Edible. (Her title is “The Blue Ribbon.”) Some of us Chicks attended an informal Media Mixer organized by Ellen. I was excited to be Dru Ann Love’s author “buddy” at this event, but somehow I didn’t get a photo.

After a breathless Saturday of panels (two of my faves were “Murder with a Hint of the Supernatural” and “Newshounds on the Case”), it was time for the Agatha Banquet. I had the honor of co-hosting a table with Ellen, our Chicks nominee. Here she is before dinner. 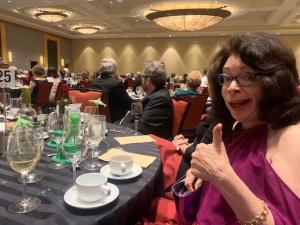 And here she is after dinner: 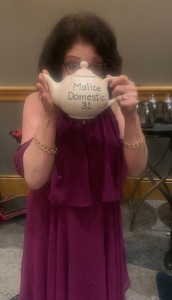 Yes, Ellen and Mardi Gras Murder won the coveted Agatha Teapot for Best Contemporary! Huge congrats to her and to all the winners and nominees. It was truly an exciting night, with so many wonderful authors and books to be celebrated.

The Chicks celebrated with a spur-of-the-moment kickline (of sorts): 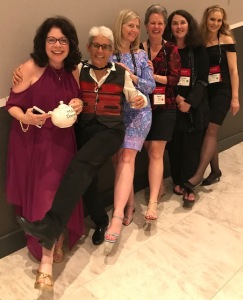 Also, I have to share this photo of our good friend Tammy Barker in her banquet attire. Did she look adorable as Miss Marple, or what?

On Sunday morning, we were up bright and early to host a Chicks-sponsored cozy mystery trivia panel. We were thrilled that so many readers and authors joined us to answer questions that ranged from Agatha Christie puzzlers to “What kind of dog is Scooby Do?” (Yes, he is indeed a Great Dane.) Occasionally, we offered a teensy bit of assistance, but for *some* reason no one got my brilliant Barnabas Collins hint. (Needed answer: “The Secret at Shadow Ranch.” Oh well.

We hope all of our contestants had fun, and enjoyed their oh-so-fabulous prizes, which included books, handy office supplies, candy, rubber chickens that stuck onto the wall when you slingshot them, and of course Becky’s to-die-for pens. Everyone a winner!

Readers, do you have any upcoming conference plans–or want to stump us with a trivia question?