Why I Might Be Psychic. As a Writer. Not as a Human.

An interesting story about a Chinese actress led me down a primrose path of ideas about murder to my latest Maizie Albright Star Detective book, 18 CALIBER. Also because my daughters are Chinese and I wanted to gift them some Easter eggs in a book. And I do love kung fu movies. But little did I know when the time to release rolled around, we would be in a global pandemic that has catapulted China into the news cycles. 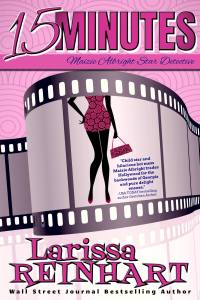 Just like the second book in my Maizie Albright series happened to have a theme about casting couches (and murder). I was shocked when 16 MILLIMETERS released the same week the producer Harvey Weinstein was busted for sexual assault and the #metoo wave was unleashed.

Not shocked at all about Harvey Weinstein. Just shocked about the timing.

This is not the problem with writing satiric books about Hollywood taking over the South and their relation to crime. I’m pretty sure this means I’m psychic. Subconsciously psychic. Which is perhaps a condition of being psychic.

It’s also making me wonder if I should be writing about peace on earth, a growing population of pandas, or polite children who eat their vegetables instead of crime. If I’m going to continue with these timely literary coincidences, wouldn’t it be better to go with a less criminal, devastating theme?

The third Maizie Albright book dealt with drugs, Youtube, and Bigfoot (naturally). The big news when I was writing NC-17 was the opioid crisis. Not a prediction. It led me to write the story. But guess what released the same fall as NC-17? The animated movies Bigfoot and Smallfoot.

Who knew that not only would I want to re-introduce the world to Sasquatch, so did Warner Bros. and WowNow Entertainment.

This leads me to a question. I already have the title to the next Maizie Albright: 19 Crimes (or 19 Criminals). I had planned to weave nineteen crimes (or criminals) throughout the story. And something about Australia, since that’s where the 19 Crimes theme originated (the list of crimes from which criminals could be sentenced to deportation to Australia). (Also the origination of the delicious wine.)

What if I unleash some monstrous crime wave? Or a rabid pack of bank robbing koalas? Maybe those boxing kangaroos will go on an assault and battery spree? The possibilities are really endless.

What should I do? Do you think I may be psychic? And does anyone know how I can maneuver this gift into something useful like choosing winning lottery numbers?

A Wall Street Journal bestselling author, Larissa writes the Cherry Tucker Mystery, Maizie Albright Star Detective, and Finley Goodhart Crime Caper series as well as romantic comedies and women’s fiction. She loves to tell funny stories about Southern women looking for love (and sometimes dead bodies) in all the wrong places. Her books have been chosen as book club picks by Woman’s World Magazine and Hot Mystery Reviews. They’ve also been finalists for Georgia Author of the Year, the Silver Falchion, the Daphne du Maurier Award, The Emily Award, and Dixie Kane Memorial. Her work also appeared in the 2017 Silver Falchion Reader’s Choice winner, Eight Mystery Writers You Should Be Reading Now. You might have seen Larissa and family with their little dog, Biscuit, on HGTV’s House Hunters International “Living for the Weekend in Nagoya” episode, but they’re back in Georgia now. Visit LarissaReinhart.com to learn more.