We’re so happy to welcome back Libby Klein, author of the warm and hilarious Poppy McAllister Mysteries. AND she’s got a delicious recipe for us!

Do you refuse to give out recipes? You pride yourself in your Great Grandma Teresa’s all-day sauce passed down on a bride’s wedding day after she kisses the wooden spoon and promises she will take it to her grave? If you ever break Great Grandma’s confidence she’ll turn her good eye on you and say, “You’re dead to me!” No one wants to hear those words from the family matriarch, but those of you holding on to the “secret recipe” you got off the back of the pudding box need to relax.

I know a lady who made a special holiday cake every year. It was her cherished tradition. One of my besties wanted that recipe bad! The woman refused. This made my friend crazy determined, and she employed my culinary prowess.  She snuck a piece of this cake away from a party and brought it to me to decode the secret ingredient. It was instant pistachio pudding. She was so disappointed, but I was positive. I’ve worked with pistachio butter, pistachio crème imported from Sicily, pistachio pastry compound. This was pudding, boxed cake mix and Cool Whip. That was the big secret. I reproduced the cake exactly to drive my point home.

Why couldn’t this lady just give my friend the recipe? What was the big deal? You aren’t going to “Beat Bobby Flay” with your Jello cake. And then I discovered why. People steal. They steal your precious recipes and call them their own!

When I was twelve, a little old lady invited us to lunch and served ham with pineapple stuffing. I had never had anything like it before. It was amazing. She only made it for special occasions and before I left she gave me the recipe. I made that pineapple stuffing for thirty years and never saw it anywhere else. I made it for holidays and church pot-lucks. It was always a show stopper. My best friend who we will call Connie, asked for the recipe. Of course, I gave it to her! I’m not like instant pudding lady. Friends share. Friends respect the sanctity of the treasured family recipe. I was so wrong.

Several years later I was invited to a Thanksgiving pot-luck. When I showed up with my special little casserole of golden buttery goodness, the hostess lit up. “Oh, you made Connie’s pineapple stuffing. We love this stuff! She makes it every year.” <insert jaw drop here.>

It seems Connie had been bringing my pineapple stuffing to events around the community. It was her go-to recipe and she was well known for it. I thought to myself, “You’re dead to me!” Soon after I went to an Easter pot-luck and the hostess excitedly announced that I’d brought “Grandma Bea’s Pineapple Stuffing.” Grandma Bea blushed and said that Connie had given her the recipe. I’m just saying, it serves Connie right. And to the pudding cake lady, I apologize.

You can bet I’ve never let Connie live this down. In fact, now I officially call it “Connie’s Pineapple Stuffing.” And since we’re all friends here, I’m going to give you HER recipe. The one she still has to call me for every single year because she can’t remember how much of everything to use.

1 stick of butter softened
Beaten with ¾ cup sugar until fluffy
Beat in 3 eggs until combined
Add 1 can crushed pineapple
Toss in 1 loaf of white bread that has had the crusts removed and been cubed.

*Note – I used gluten free bread now, but either way it’s better if you remove the crusts and let it sit out in the open over night to get a little dry. Of course, you can ask Connie what she recommends. She is the expert.

Place in a 2-quart casserole dish and bake at 350° for one hour or until the top is golden brown and the stuffing is bubbly on the edges. Fantastic with glazed ham.

Readers, do you have a signature recipe? And did anyone ever steal a recipe from you? 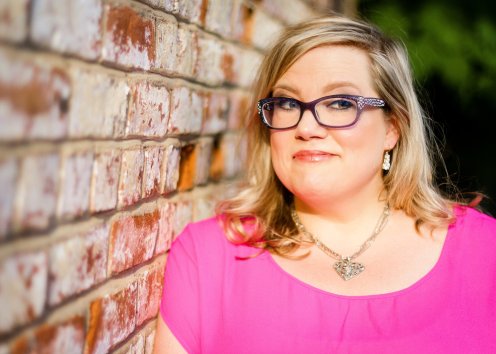 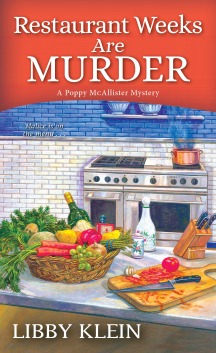 Cape May, New Jersey, is the site of a big culinary competition—and the knives are out . . Poppy McAllister is happy about opening a Jersey Shore B&B—but working in a professional kitchen has always been her real dream. Now it’s coming true, at least briefly, as she teams up with her former fiancée, Tim—and his condescending partner, Gigi—during the high-profile Restaurant Week challenge. Poppy’s specialty is pastries, despite her devotion to a Paleo diet. But if anyone can make glorious gluten-free goodies, it’s Poppy. Things get heated quickly—especially when some ingredients get switched and Tim’s accused of sabotage. Relatively harmless pranks soon escalate into real hazards, including an exploding deep fryer. And now one of the judges has died after taking a bite of Poppy’s cannoli—making her the chef suspect . . .

About Libby Klein: Libby Klein graduated Lower Cape May Regional High School sometime in the ’80s. Her classes revolved mostly around the culinary sciences and theater, with the occasional nap in Chemistry. She loves to drink coffee, bake gluten free goodies, and befriend random fluffy cats. She writes from her Northern Virginia office while trying to keep her cat Figaro off her keyboard. Most of her hobbies revolve around eating, and travel, and eating while traveling.