I first met Connie when we shared a cab  ride from Dulles Airport to the Malice Domestic Convention. A few years later, I was thrilled to hear that not only was her first mystery being  published, the publisher was Crooked Lane Books, home to my own Cajun Country Mystery series. Connie, we Chicks can’t wait to learn about your series!

A SENSE OF PLACE

The question I’m asked most frequently is, “Why have you set your books in the UK?” It’s a valid question. If I had followed the advice to “write what you know,” my stories would be set in the Midwest, populated with people I cross paths with every day. And believe me, there’s plenty of material to write about in the average American town. Wonderful mysteries set in locations from the Deep South to the Great Northwest to historic New England prove it. “But this is fiction,” my heart whispers. “You can write what you love.”
Elizabeth George once said, “I set my novels in England because I like to write about England.” My sentiments exactly.

My passion for all things British comes naturally. My paternal grandparents were born in Scotland, so I grew up with the accents, tastes, and tales of the “auld country” in my ears, mouth, and heart. In college I chose English literature as my specialty. During my university years, I studied at St. Clare’s College in Oxford. My master’s thesis was on Shakespeare’s comedies. But to me, the best thing about the British Isles is the richness and depth of history—the past. I’m a history junkie. The older the better. Everywhere you go in the British Isles, history lives and breathes.

My husband and I just returned from two weeks in Ireland and Scotland. In Dublin, we had dinner at The Brazen Head, site of an inn since 1198 and the place where Robert Emmet and the United Irishmen plotted the Rising of 1798 against British rule. The rebellion failed, and Emmet was hanged. Ironically, the hangman also used to drink at The Brazen Head.

We marveled at Dublin’s Christ Church Cathedral whose foundations were laid in the 11th century, and we contemplated the grave of Richard de Clare (Strongbow), who led the Anglo-Norman invasion of Ireland in 1170. 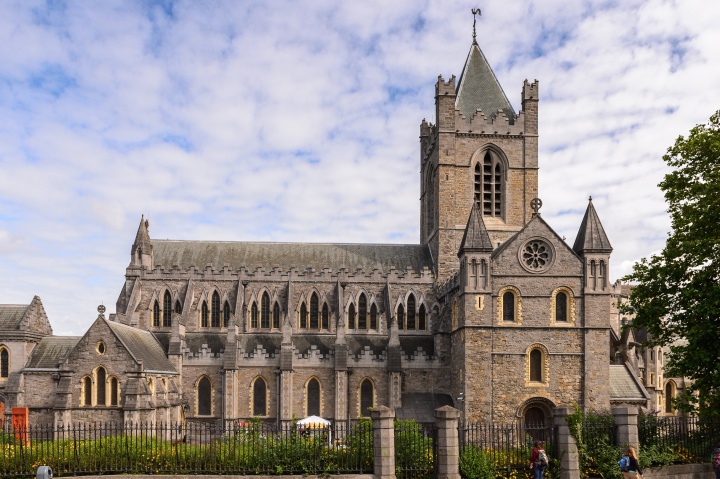 In Glasgow we visited Tenement House, a living time capsule, a working-class flat left exactly the way it was fifty-six years ago, the day its occupant was taken to hospital. Washing hung on the pulley, unwashed iron pots littered the hob, jars of jam filled the larder, a hot water bottle was still tucked between the sheets of the box bed in the kitchen. Time travel.

In Stirling, the “golden clasp” uniting the Scottish Lowlands and Highlands, we wandered through Stirling Castle, where nearly every Scottish monarch was either baptized, crowned, or died. Mary Stuart spent the first years of her life there, and on September 9, 1543, at the age of nine months, she was crowned Queen of Scots.

History plays a role in all my books. My protagonist, Kate, and I share a similar background. We were raised by charmingly eccentric antiques collectors who eventually opened a shop, not because they loved to sell antiques but because they needed a plausible excuse to keep buying them. Kate’s knowledge of antiques and her background as an historian provide her with the skills needed to uncover secrets long hidden and discern motives with roots deep in the past.

Readers, is there a place you feel particularly drawn to?

BIO: Raised by charmingly eccentric antiques collectors, Connie Berry didn’t realize for years that most people don’t have life-size marble busts of Marie Antoinette in their living rooms and don’t eat dinner on antique china plates depicting the Rape of the Sabine Women. Now older and wiser, Connie adores cute animals, foreign travel with a hint of adventure, all things British, and (yes) antiques. She and her husband have two sons and live in Ohio with their adorable dog Millie.

SUMMARY: Autumn has come and gone on Scotland’s Isle of Glenroth, and the islanders gather for the Tartan Ball, the annual end-of-tourist-season gala. Spirits are high. A recently published novel about island history has brought hordes of tourists to the small Hebridean resort community. On the guest list is American antiques dealer Kate Hamilton. Kate returns reluctantly to the island where her husband died, determined to repair her relationship with his sister, proprietor of the island’s luxe country house hotel. The next morning a body is found, murdered in a reenactment of an infamous crime described in the novel. The Scottish police discount the historical connection, but when her husband’s best childhood friend is arrested, Kate teams up with a vacationing detective inspector from Suffolk, England, to unmask a killer determined to rewrite island history–and Kate’s future. 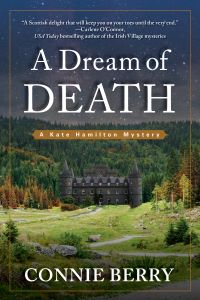