Given my adoration of all things culinary (which sentiment is shared by my restaurateur protagonist, Sally Solari), I thought it was high time for another food-related post on the Chicks. So here’s a little love letter to butter:

I’ve been in love with butter from as far back as I can remember. When I was a kid, my mom used to leave a stick of butter out on the counter in a dish, and I’d sneak into the kitchen when no one was around and cut off a fat slice and eat it. No bread, no crackers; just the luscious butter, all by itself.

I’ll never forget that fateful day—I must have been about eight years old—when I sneakily sliced a surreptitious hunk of golden pleasure, placed it on my tongue to melt, and then got the shock of my life.

What was this?! Not butter, that was for sure. I spat it out into the sink.

Alas, my mom had switched to margarine.

The history of butter, I learned from Jennifer McLagan’s fabulous book, Fat: An Appreciation of a Misunderstood Ingredient, was largely dictated by climate. This makes sense: in warm climes butter wouldn’t keep, so you’d have to either alter its chemical makeup, or use some other kind of fat that was more easily preserved. Thus, in India they learned to make ghee, and in the Mediterranean they tended to use things like olive oil for cooking, and butter was used only for external purposes:

In fact, in many cultures the idea of eating butter was ridiculous; it was considered something only a barbarian would do…. The majority of people who ate their butter in its solid state lived in the cooler climes of northern Europe and the grasslands of Central Asia, where butter lasted better and the abundant pastures provided food for animals. The Vikings and Celts who spread butter culture throughout northern Europe also valued butter’s medicinal qualities, and their word for “butter” and “ointment” were the same….

Jennifer McLagan’s book provides instruction for making your own butter, so—being the avowed cream hound that I am—I decided to try my hand at it. (My best friend Nancy and I actually attempted to make butter once when we were about ten years old. But since we had resolved to make it “the old-fashioned way,” which—not knowing about butter-churns, we mistakenly assumed was with just a fork—not surprisingly did not turn out well. I think we tired of the game before the cream had even reached its whipped stage.)

Buy the best quality heavy whipping cream you can find and pour it into a large bowl, then whip the cream with a mixer as you would to make whipped cream. After a few minutes it will start to stiffen, and it will then reach the point where you would normally stop if you were using it to top a pie or mousse.

Keep going. I thought that it would turn to butter fairly soon after it had gotten to the whipped cream stage, but that ended up being only about a third of the way into the process (it took about 10 minutes for mine to turn to butter, but then again, I was stopping often to take pictures). The cream will start to have a lumpy appearance,

and then it will look kind of like cottage cheese. Use a baking spatula, as needed, to push the mixture back down into the bowl. Continue beating it with your mixer. The sign that you’re finally getting to the butter stage will be that the liquid (which is true buttermilk, hence the name) starts to separate from the butter.

From this point on, the mixing process becomes quite messy, as the liquid tends to splash all over the kitchen. So beware. (You might want to drape a dish cloth over the bowl as you mix.) Continue to beat until the butter is difficult to mix any further and starts to collect on the beaters:

The next step is to place all the butter into a fine-mesh strainer:

Then use a wooden spoon (or your hands) to press as much of the liquid out as possible.

Save this buttermilk (two cups of cream yielded almost one cup of buttermilk). It’s delicious to drink: sweet and flavorful and not at all like the tangy store-bought variety, which is just regular milk to which lactic acid has been added. Or you can use it to make biscuits or pancakes, to to marinate chicken in before frying.

The next step is to knead the butter for a minute or two, to get out any remaining liquid (which can hasten the butter turning rancid). Using a dough scraper will assist in this process.

Next, add salt (about ½ teaspoon for 2 cups cream) and work it into the butter with your hands, if you want salted, rather than sweet, butter. (I did not do this, as I prefer it sweet.) Then place the butter on a piece of wax paper, form it into whatever shape you want, and wrap it up. 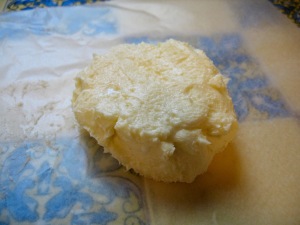 I let mine chill for the afternoon, and then pulled it out of the fridge about a half hour before dinner so it wouldn’t be too hard. (See photo at top.)

We had it with a loaf of crunchy French bread which I had warmed in the oven. 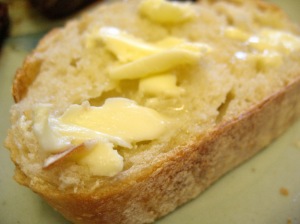 Readers: Have you ever made your own butter, or had home-made butter? Did you think it was worth the effort?

22 thoughts on “Nothing Better Than Butter!”